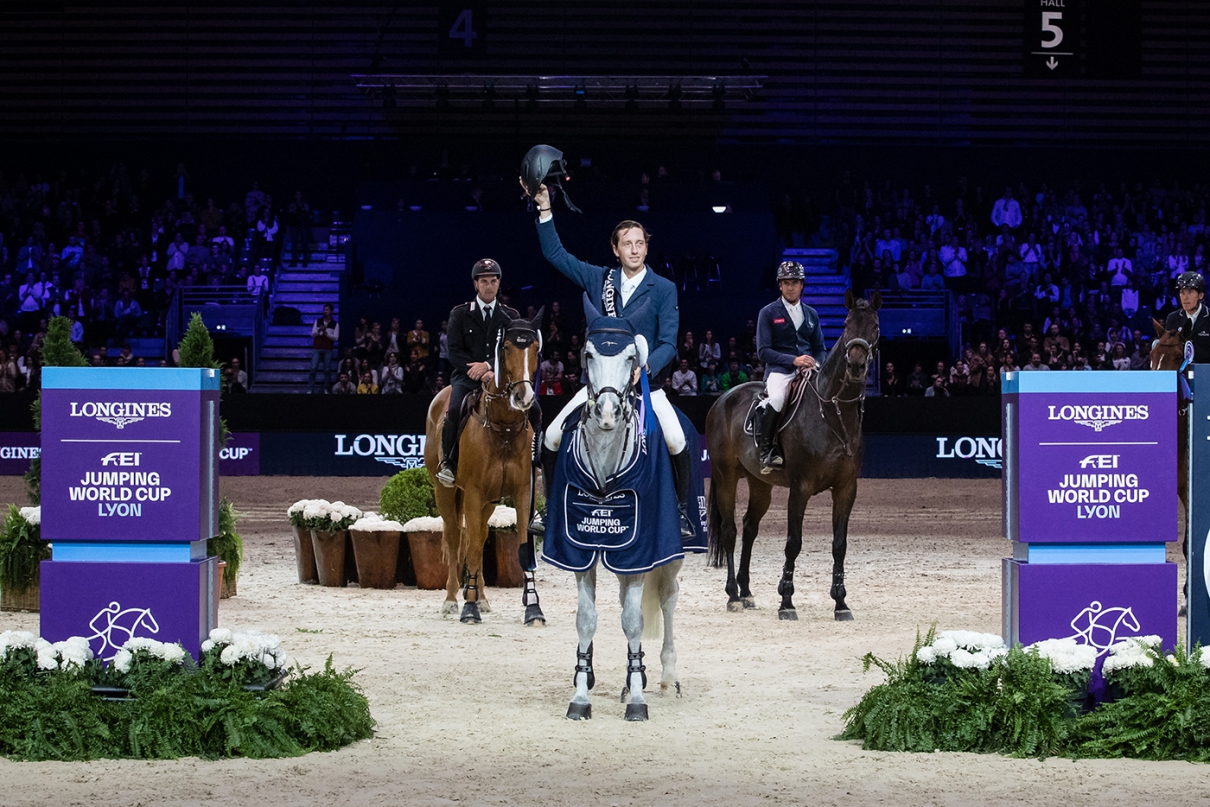 Switzerland’s Martin Fuchs and his brilliant gelding Clooney showed exactly why they are the superstars of the sport right now when scorching to victory in the third leg of the Longines FEI Jumping World Cup™ 2019/2020 Western European League at Lyon in France this afternoon.

The 27-year-old rider, who is reigning European champion and No. 2 on the current Longines world rankings, was back on familiar territory having also won this leg 12 months ago with his same grey wonder-horse. And it was just another magic Sunday for the Swiss star and his equine flying machine when they romped to success once more in the 13-horse jump-off, rocketing to the top of the WEL League leaderboard.

They were chasing the target-time set by America’s Jessica Springsteen and RMF Zecilie who zoomed around the jump-off track in 41.85 seconds, the lovely 12-year-old mare almost clearing the wings of the oxer three from home as she put on an exhibition of enthusiastic athleticism. But, fifth-last to go, somehow Fuchs and Clooney put the result almost beyond doubt when stopping the timers just over half a second sooner.

“I was lucky to start at the end of the jump-off because I could watch Jessica as I know her horse has about the same stride as Clooney. So I planned to do like her, except I made one less stride to the last fence which made me win today!”

French course designer, Gregory Bodo, described the 14-fence first-round course as “quite long but horse-friendly”, and it was the triple combination at seven and the double at fence nine that claimed most victims along with the time-allowed of 84 seconds. However 13 found the key, and 27-year-old Springsteen really put it up to the rest of them with her breathtaking ride when third to go against the clock.

No-one had really challenged her until Fuchs set off with all guns blazing, but once the Swiss rider put 41.27 seconds on the board there were still four more to follow, and none of them were shrinking violets. However his compatriot and World No. 1 Steve Guerdat (Venard de Cerisy) clipped the penultimate vertical, and despite being double-clear the final three – Italy’s Emanuele Gaudiano (Chalou), Belgium’s Pieter Devos (Claire Z) and Frenchman Julien Epaillard (Queeletta) – didn’t jostle the leading pair out of place, Devos taking third when breaking the beam in 41.95.

Talking about her mare RMF Zecilie, runner-up Springsteen described her as “an amazing horse – it took me about six months to get to know her but now we are all set up and she is great!”

Fuchs meanwhile has the world at his feet, and is already looking forward to next year and what it will bring. “It’s a big victory today, Clooney was in great shape and he jumped wonderfully” he said, adding however that he’s not specifically targeting any more Longines FEI Jumping World Cup™ qualifiers with his super-champ.

“I just wanted to do one (qualifier) with him so I can take him to the Final if I need to, but because of the Olympic Games next year the plan is not to take him to Las Vegas. I will go to Verona, Stuttgart and London with other horses to try to qualify, and if I do then I will decide which horse I will bring”, the Swiss rider explained.

With or without Clooney, he looks a very good bet to make the cut to the Longines 2020 Final which will take place in Las Vegas, USA from 15 to 19 April, especially since he already has more than half the points required at this early stage of the 14-leg Western European League which moves on to Verona, Italy next weekend.