Blog - Latest News
You are here: Home / Werth and Weihegold make it a hat-trick in Amsterdam 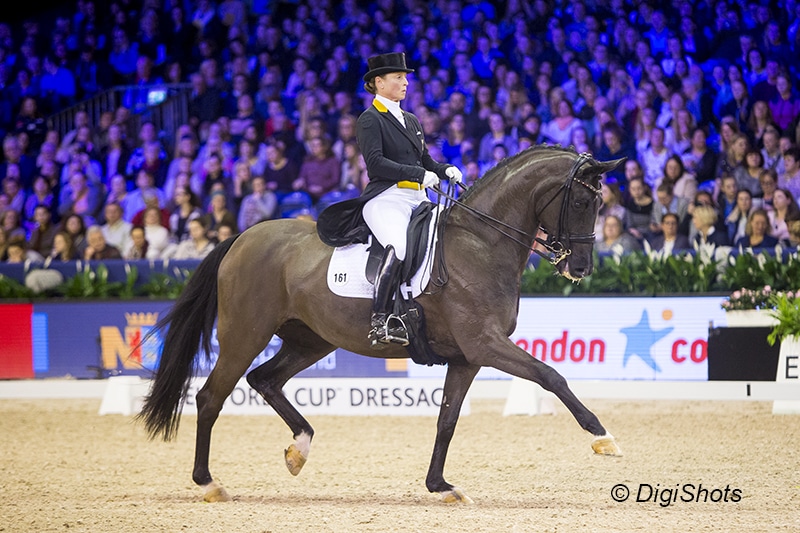 As if to further cement their absolute supremacy, the world no. 1 partnership of Germanyâs Isabell Werth and the fabulous mare Weihegold secured their third win of the FEI World Cupâ ¢ Dressage 2016/2017 Western European League in Amsterdam (NED) today. Having produced a personal-best score to top the line-up at the second leg of the series in Lyon (FRA) in October, they fell just short of that when also securing pole position at the next round in Stuttgart (GER) the following month. Today, however, their Freestyle mark of 90.720 percent is the highest ever achieved by the 47-year-old rider who is widely acclaimed as the most medalled equestrian Olympian of all time.

Runners-up were the winners of the previous leg at London Olympia, Great Britainâs Carl Hester and Nip Tuck, while Swedenâs Patrik Kittel produced an inspired ride with the delightful mare Deja to slot into third. Dutch riders filled the next five places, headed up by 2010 FEI World Cupâ ¢ Dressage champion Edward Gal who slotted into fourth with Glockâs Voice and 2016 title-holders Hans-Peter Minderhoud and Glockâs Flirt in fifth.

Gal was first to post a score over 80 percent when 11th to go of the 15 starters. And, next into the ring, Minderhoud looked set to overtake him with some wonderful work from his 16-year-old gelding until it fell apart for this pair in the closing stages. Kittelâs test just bubbled with excitement as his magical mare danced to the strains of Stevie Wonder to go out in front with a mark of 80.269 but then, with consummate ease, Werth raised the game with a performance that was in a class of its own. She said afterwards that this was her âvery best Freestyleâ, and thatâs quite a statement from the six-time Olympic gold medallist who took the first of her two FEI World Cupâ ¢ titles back in 1992.

The roars of approval for her score were still ringing out as, last to go, Hester entered the arena with Nip Tuck who gave him âthe nicest feeling Iâve had in a test with him – ever!â, posting 83.325 for second spot.

But it was Werth who stole the hearts of the crowd who gave her, and her 12-year-old mare, a noisy standing ovation. âIâm so happy, this is our best form ever and I hope to save that for as long as I can! We are becoming safer with the music, more confident and together with it, this was really a perfect day!â she said. Werth has now moved to the top of the Western European League table ahead of Hester in second and Irelandâs Judy Reynolds in third, and the German rider looks a hot favourite for the title when the series Final gets underway in Omaha, Nebraska (USA) in eight weeks time.