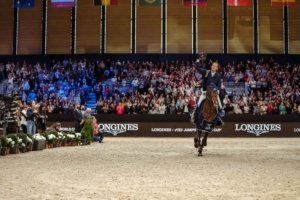 World number three, Martin Fuchs, won today’s second leg of the Longines FEI Jumping World Cup™ 2021/2022 Western European League at Lyon in France with a breathtaking jump-off round partnering the 14-year-old stallion Chaplin. This was the Swiss athlete’s third successive victory at the French fixture, having come out on top in both 2018 and 2019 with his great grey gelding Clooney.

From a starting field of 40 that included seven of the top ten riders in the current Longines World Rankings, a total of 11 horse/athlete combinations made the cut into the second-round jump-off in which only three managed to leave all the poles in place once again.

Fourth to go against the clock, Brazil’s Eduardo De Menezes was the first of these and set a super-fast early target with HS Chaganus in 35.14 seconds while, fourth-last to go, Austria’s Max Kuhner slotted in behind him when just over a half-second slower with Elektric Blue P.

Fuchs was next into the ring, and the 29-year-old who claimed team gold and individual silver at the FEI European Jumping Championships 2021 in September partnering the lovely Leone J meant business from the outset, and galloping home in the winning time of 34.50 he pinned De Menezes into second and Kuhner into third.

Today’s result rockets Fuchs up to second place on the Western European League leaderboard which continues to be headed by first-round winner, The Netherlands’ Kevin Jochems who finished seventh this afternoon with Turbo Z.

The next round of the 11-leg series takes place in Verona, Italy next Sunday, 7 November.

Cathrine and Cassidy are the show-stealers at Herning

Werth steps back into the Lyon limelight
Scroll to top