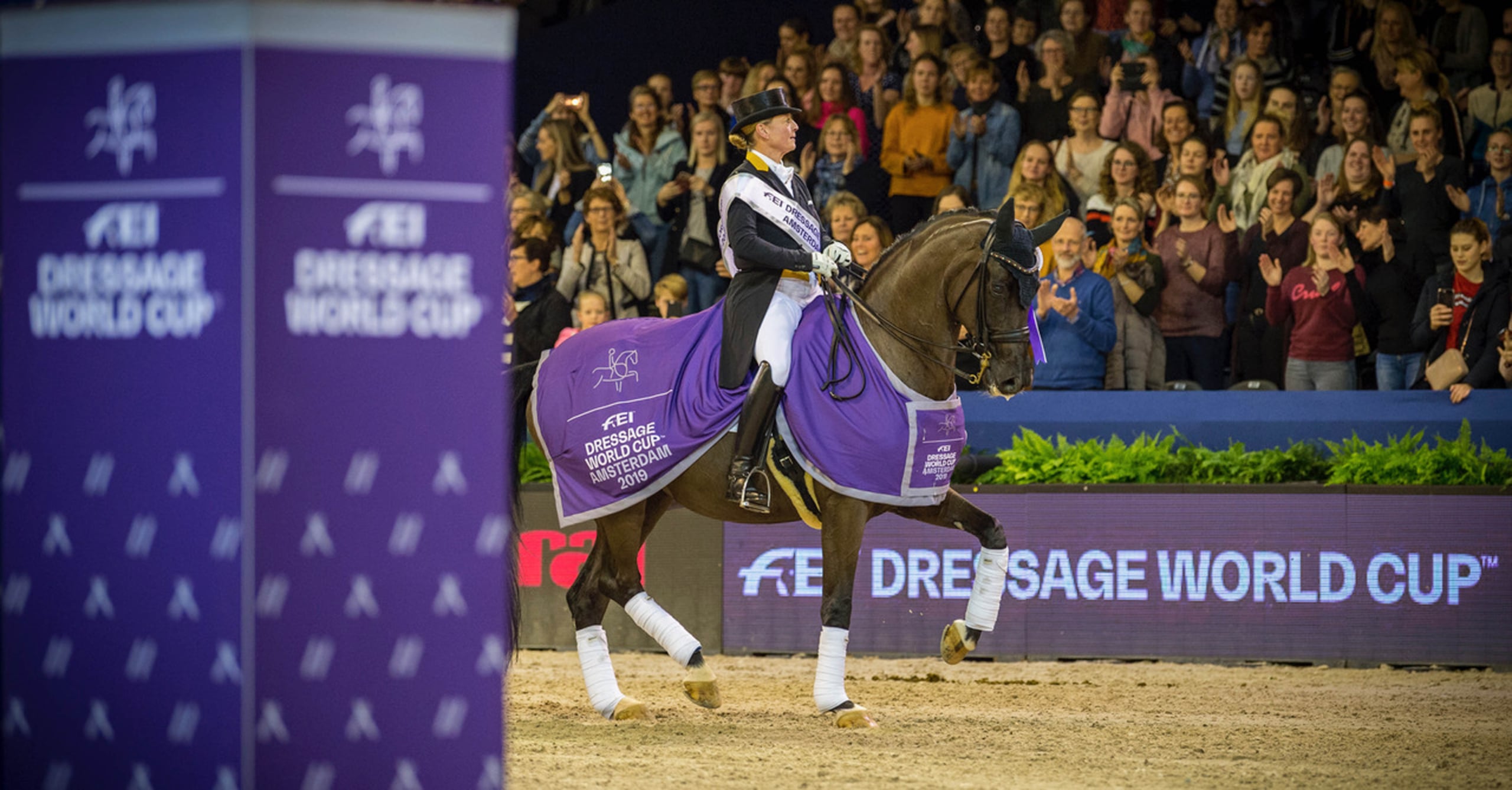 Four-time series champion, Isabell Werth (49) from Germany, stamped her authority all over the opposition with another superb win at the eighth leg of the FEI Dressage World Cup™ 2018/2019 Western European League in Amsterdam (NED) today.

Having lifted the series trophy for the last two years, Werth is automatically qualified for the 2019 Final in Gothenburg (SWE) in April. Her only task throughout the season is to compete twice with the horse with which she intends to defend her title, and after winning in Lyon (FRA) with Emilio and stealing the show in Stuttgart (GER) with Bella Rose, she showed just how spoiled she is for choice when coming out on top once more today, this time with the brilliant mare Weihegold OLD who carried her to victory in both 2017 and 2018.

The most medalled athlete in equestrian sport, who is targeting her fifth title and her third in a row, was delighted with Weihegoldâs performance this afternoon, especially following some unexpected shenanigans on their way to pole position in yesterdayâs Grand Prix.

âToday she was much more calm – yesterday she did the first part of the test nicely, but she really turned it on in the canterwork and we couldnât manage the two-tempis! Today she was much more cool. The thing about her is that sometimes she just wants it all too much – but this is a mistake I can live with!â, Werth said.

On a day of total German domination, her compatriots Dorothee Schneider (49) riding Sammy Davis Jr and Helen Langehanenberg (36) partnering Damsey FRH finished second and third, while fourth place went to popular Swede, Patrik Kittel (42) with Delauney OLD. Schneider has now moved to the head of the Western European League leaderboard from which the top nine will qualify for the Final.

Langehanenberg, series champion in 2013, set the first half of the competition alight with a technically tough but superbly executed Freestyle from the 17-year-old Damsey who was with her every inch of the way to take the lead with a score of 82.440 that would not be easy to catch. Denmarkâs Daniel Bachmann Andersen posted 80.400 with the lovely 11-year-old stallion Blue Hors Don Olymbrio, but the pair who topped the previous leg in Mechelen (BEL) last month, The Netherlandsâ Hans Peter Minderhoud and Glockâs Dream Boy NOP, squeezed them out of temporary second spot when putting 81.380 on the board.

And then, with four left to go, Schneiderâs Sammy Davis Jr swaggered his way to the top of the scoreboard with a brilliant test that included spectacular trot-work and  perfect passage. Their mark of 82.675 was now the one to beat, and Kittel came close when Delaunay OLD was awarded 82.440 for a very difficult floorplan, while the penultimate partnership of Judy Reynolds and Vancouver K danced their way to 80.290. On a day of competition that was of championship standard this would only be good enough for seventh place, but it is a new Irish international record score, so her support crew were already celebrating as she left the arena.

Last in however, Werth and Weihegold were in a league of their own, the mare producing a near-seamless test that clearly demonstrated her extraordinary skills and those of her truly exceptional rider. âShe was full of focus and motivation today – really fantasticâ, the German legend said of her horse whose beautiful big ears were standing to attention all the way through their test.

Werth plans to do both of the two remaining Western European League qualifiers, on home ground at Neumunster (GER) in three weeks time and âs-Hertogenbosch (NED) in March, giving both Emilio and Weihegold another outing each. And sheâs really looking forward to the Final in Gothenburg.

Itâs 27 years since she won her first FEI Dressage World Cup™ title in that same Swedish city in 1992, âand itâs very special to go back, I always really love going there because itâs a fantastic show!â she said today. But, typically modest, she wouldnât be drawn on the prospect of posting that fifth series success.

âI would never say Iâm going there to win – Iâve been doing this job for a long time now and you never know whatâs going to happen. You know me, I always like to keep both feet on the ground!!â she insisted. 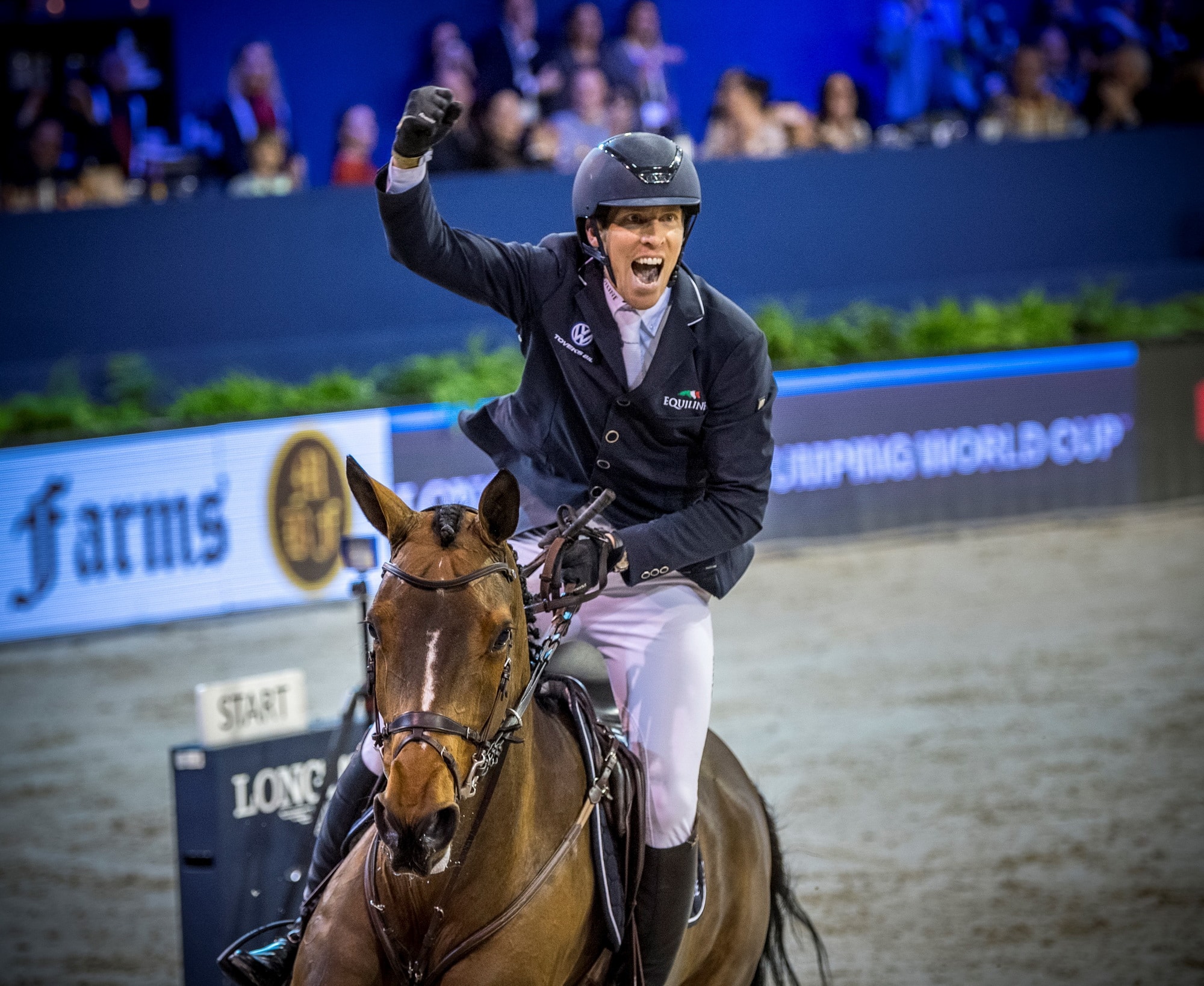