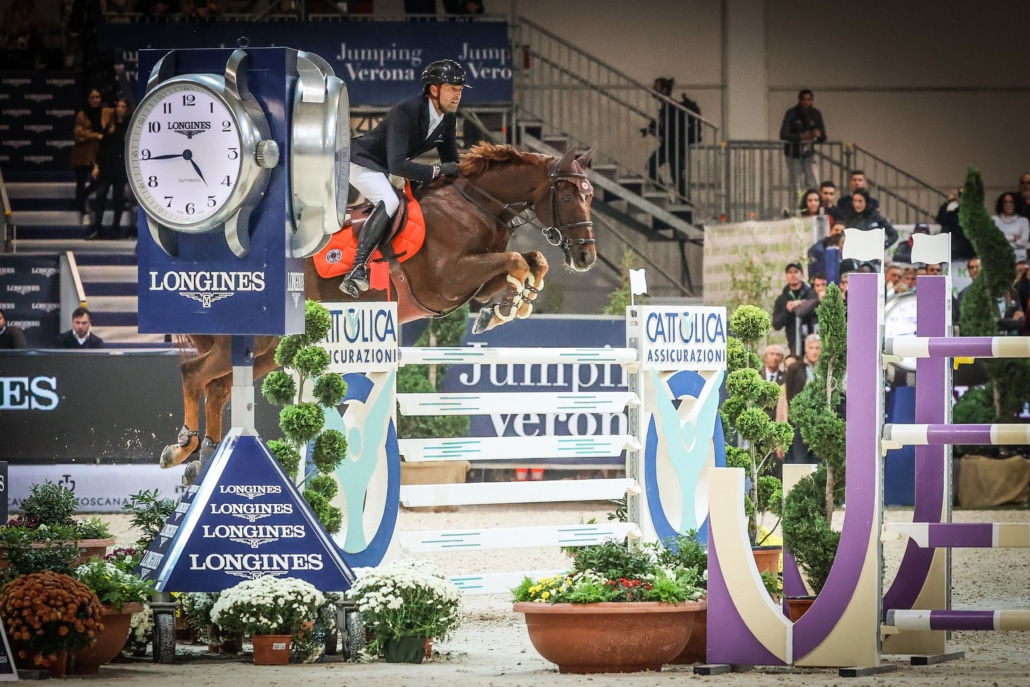 On a dramatic afternoon in Verona, Italy today, Simon Delestre and the evergreen 16-year-old Hermes Ryan galloped to victory in the third leg of the Longines FEI Jumping World Cup™ 2021/2022 Western European League.

Germany’s Kendra Claricia Brinkop took the early lead in the 12-horse jump-off with Kastelle Memo, throwing down a time of 37.80 seconds that would prove difficult to beat. But the turn to the innocuous-looking vertical at fence nine, this time the second obstacle on the course, saw Great Britain’s Emily Moffitt take a tumble when Winning Good put in a stop, while the competition was held for some time after Colombia’s Carlos Lopez had a fall from Admara at the same fence.

Admara left the arena at a trot while Lopez was taken to hospital with a suspected shoulder injury, and when the action resumed Brinkop’s target time still proved too difficult to get. That was until, second-last to go, Delestre set off with the trusty little chestnut gelding with which he won individual bronze at the FEI European Championships in Aachen, Germany in 2015. Scorching through the finish in 37.32 they took over the lead, and although Ireland’s Denis Lynch was clear with GC Chopin’s Bushi their time of 38.62 seconds was only good enough for third spot behind Brinkop in second and Delestre at the head of affairs.

Today’s result moves Jens Fredricson up to second place on the Western European League table which continues to be led by The Netherlands’ Kevin Jochems, winner of the opening leg of the series in Oslo, Norway last month.

Werth steps back into the Lyon limelight

Epaillard and Billabong gallop to victory in Madrid
Scroll to top