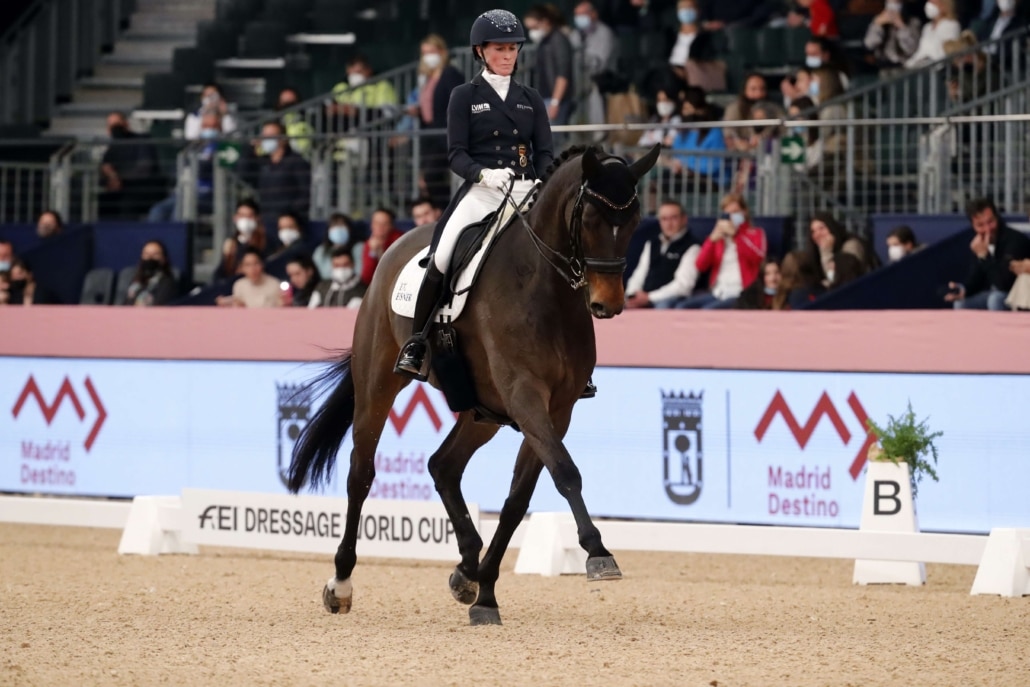 It was a very particular triumph for German star Helen Langehanenberg when topping the third leg of the FEI Dressage World Cup™ 2021/2022 Western European League in Madrid, Spain this evening. The 39-year-old athlete is a former winner of the prestigious series, an Olympian and this summer became a European team gold medallist. But today’s success was all the sweeter because her brilliant but sensitive mare Annabelle really showed what she can do when she settles to her job.

“She is such a very special horse, full of talent but with so much temperament that she is not always easy, but I’m very happy today. I was last to go and there was plenty of pressure but that’s good for me, it means I just have to go for it! And today she allowed me to support her and it felt really good”, Langehanenberg said.

She was chasing the score of the very first of the 12 athletes into the ring, Spanish superstar Beatriz Ferrer-Salat who set a really tough target for the rest when posting 79.220 with the 12-year-old mare Elegance, and who stayed out in front until the very last pair overtook her. On an afternoon of great sport the home crowd had plenty to cheer about with five Spanish starters and two of them finishing in the top three when Juan Matute Guimon steered the 15-year-old gelding, Quantico, into third place.

Ferrer-Salat is a five-time Olympian and six-time national champion, and with the 12-year-old Elegance was a member of the Spanish team at this summer’s Tokyo 2020 Olympic Games. Putting her strong score on the board as the action got underway today, she could then sit back and let the rest try to better it.

Compatriot Juan Matute Guimon was the first to come really close when scoring 78.160 with his 15-year-old gelding who put on a lovely show without ever looking under any pressure when third-last to go. The quality of the horse’s one-tempi changes down the centreline were a joy to watch as was the athlete’s smile as he cruised to a great finish in piaffe/passage. At just 24 years old the highly popular and super-talented Matute Guimon is already a legend, making a remarkable recovery from a brain bleed in May 2020 to bounce back to the very top of the game.

Second-last into the ring was Germany’s Frederic Wandres who won yesterday’s Short Grand Prix with Bluetooth OLD, but their mark of 77.230 would only be good enough for fourth spot today when Langehanenberg and the extravagant mover Annabelle soared out in front with a score of 80.500.

Annabelle’s reach in the lateral movements is extraordinary, and today she showed moments of real flamboyance. But for her rider it is always a case of getting the balance right in order to maintain control and to keep her confidence.

“When she was young she was a real mare – when you touched her there wasn’t a centimetre between too much and not enough, it was so difficult to find the perfect aids for her but I’m so happy with what we have reached now.”

“It’s still only the beginning, I feel there is so much more we can do if she allows me to support her.  The more she does the more relaxed she becomes. She always has enough expression but she doesn’t always have enough relaxation but routine will bring relaxation so I’m working on that. She’s easy to train, but she almost tries to be too perfect!”, Langehanenberg explained.

Runner-up, Ferrer-Salat, couldn’t attend the post-competition press conference because she was busy with a retirement ceremony for her great old campaigner, the 20-year-old Delgado. Third-placed Matute Guimon meanwhile was proud and honoured to be in the prizegiving ceremony with his compatriot, and with today’s winner Langehanenberg.

“It’s such a cool feeling after my comeback in Lyon”, he said, referring to his eighth-place finish at the French fixture that hosted the second leg of the 2021/2022 Western European League four weeks ago. Until making such a successful return to the series he had been intending to head for the Winter Equestrian Festival circuit in Wellington, USA in January, but now he may change his plans. “I might join Helen in Amsterdam (NED) or Den Bosch (NED) instead!”, he said tonight.

He’s delighted to be back in partnership with Quantico. “When I got back to the barn the first time after my accident he looked at me as if to say ‘is that really you?’ He is such a special horse, not the easiest but such a nice horse and we have a unique bond – we are two hearts together!”, the young Spanish star said.

Tonight’s result leaves him lying tenth on the Western European League leaderboard from which the top nine will make the cut to the series Final in Leipzig, Germany next April. Today’s win sees Langehanenberg move into fifth spot when adding the maximum 20 points to the 13 she collected for fourth place at the opening round in Herning, Denmark last month. However it is Wandres who continues to head the standings going into the next round in London (GBR) in three weeks time.

For German athletes getting to the Final is a really tough task because so many of them are vying for places and only three per country are permitted to compete. As Langehanenberg explained today, “Isabel (Werth, defending champion) is going anyway and Jessica (von Bredow-Werndl) will try as well – and if she goes with Dalera then nobody can beat her! Frederic (Wandres) has good points already and he will try to qualify too, but we will for sure try out best and we will see if we can make it!”

The Western European League action will resume at the London International Horse Show, with the Short Grand Prix taking place on Thursday 16 December followed by the points-deciding Freestyle on Friday 17 December.

Epaillard and Billabong gallop to victory in Madrid