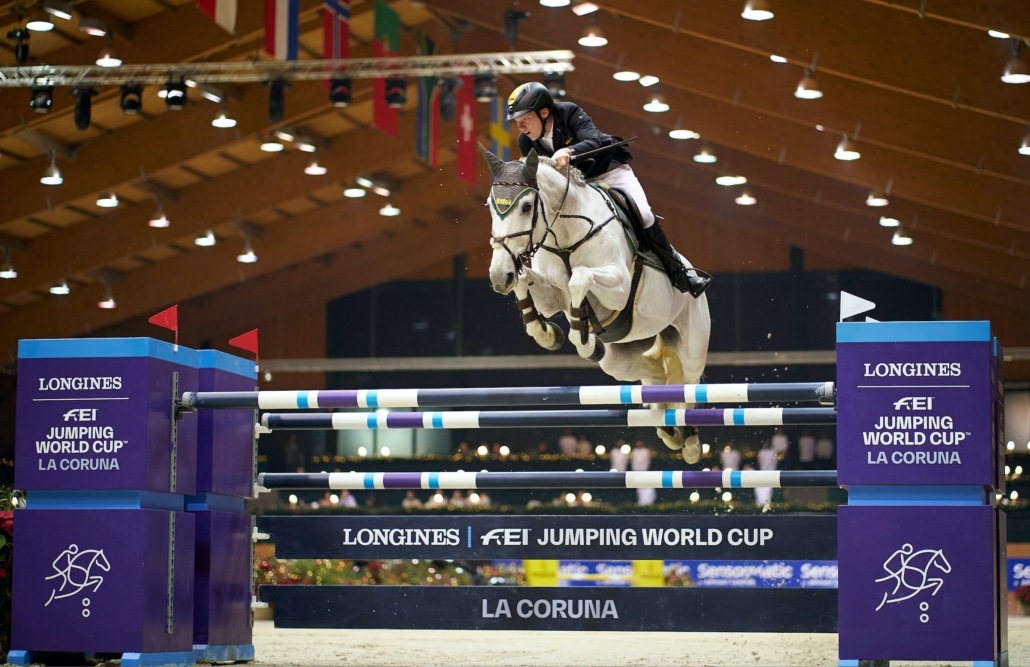 On his World Cup debut, 23-year-old German Philipp Schulze Topphoff breezed to victory with a stunning performance from his 11-year-old mare Concordess NRW in La Coruña, Spain this evening. This fifth leg of the Longines FEI Jumping World Cup™ 2021/2022 Western European League was no walk-in-the-park, and only seven of the 39 horse-and-rider combinations found the key to the first-round track set by Tokyo 2020 Olympic course designer, Spain’s Santiago Varela.

But with all the confidence that goes with youth, and supported by his brilliant grey mare who was clearly unfazed by the task set for her today, Schulze Topphoff produced a foot-perfect run when first to go in the opening round and didn’t flinch when pathfinder against the clock to set a target that couldn’t be bettered.

“This is definitely the biggest win I’ve ever had and I don’t know what to say except I’m really, really happy!”, said the young man who has firmly put himself on the map after today’s brilliant result.

Runner-up spot went to the French partnership of Gregory Cottard and Bibici while Sweden’s Angelica Augustsson-Zanotelli lined up in third ahead of the Ireland’s Mikey Pender and HHS Calais in fourth place.

When the first horse goes clear in any competition there is always a curiosity about whether the track will jump easily, but today was a perfect example of the opposite. Varela’s test demanded a lot of stride adjustments, and the last three fences on the 13-obstacle first-round course were the undoing of many.

There was little room for error of line on the tight left-hand turn off the side of the arena to the oxer at fence eleven, and many riders had to increase acceleration on the approach to make it work. Subsequently the following vertical with a delicate white plank on top, jumped off a curving right-hand bend, often came up awkwardly and if balance wasn’t quickly re-established then the final oxer was the heart-breaker as it hit the floor.

That plank proved the undoing of Schulze Topphoff’s compatriot and three-time Longines FEI Jumping World Cup™ champion Marcus Ehning whose lovely stallion, Stargold, clipped it in an otherwise perfect round. And the Dutch partnership who came out on top at the last fixture at the Casas Novas Equestrian Centre in La Coruña two years ago, Maikel van der Vleuten and Beauville Z who together clinched individual bronze in Tokyo this summer, looked well on the way to a place in the jump-off until coming adrift over those final two fences.

Just two riders picked up a single time fault in an otherwise faultless round, and the first of these was Belgium’s Ludo Philippaerts who retired back in 2014 but, now back at the top end of the sport, looked set to make a dramatic statement of intent with his 10-year-old grey, Laurier until over-running the 74 seconds time-allowed. His twin sons, Olivier and Nicola, and his nephew Pieter Clemens were also in action today, but the only Belgian contender to make the cut into the second-round decider was Jos Verlooy who eventually finished fifth.

First against the clock, Schulze Topphoff really threw it down to the rest of them when turning tight inside the final fence on the new course en route to the second fence. He said afterwards that he “lost a bit of time” after the following double but when he scorched through the finish in 37.69 seconds it certainly looked a tough time to beat.

The Netherlands’ Marc Houtzager and Sterrehof’s Dante NOP lowered the second element of the double when next to go, but Augustsson-Zanotelli and the 11-year-old mare Kalinka van de Nachtegaele left all the poles in place to slot temporarily into second spot in 38.39 seconds when following them into the ring.

Cottard then set sail, and despite taking the longer route to the second fence by going around the final oxer, came close to taking over the lead when breaking the beam in 37.78 seconds and moved into runner-up position.

Ireland’s Mikey Pender is always fast, and even though the 10-year-old HHS Calais is a tall, leggy horse he still managed to produce the quickest time, galloping through the timers in 36.08 seconds but carrying four faults when hitting the third-last. With just two left to go, Brazil’s Eduardo Pereira de Menezes was also quick, stopping the clock on 36.92 seconds but dislodging a pole at the second fence along the way.

However for last man in, Jos Verlooy, it was even more frustrating when, well up on the clock coming to the last, that fell for four faults which saw him having to settle for that fifth place.

Winner, Schulze Topphoff, said tonight that he was more nervous watching the rest trying to beat him than riding his own jump-off round. Talking about Concordess NRW who carried him to individual gold and team bronze at the 2019 FEI European Young Riders Championship, he described her as “a bit of a diva!”

“She always has her own ideas – sometimes she works with me but sometimes I have to go her way, but she’s always really fighting for me, she has a really powerful character!”

said the rider who is based on his family’s small farm near Münster in Germany. The pair have been together a long time. “She is owned by my mother and we have her since she was four years old and she went to her first shows with us. We trust each other, I choose a way to go and she knows I won’t ever ask her to do the impossible. We’ve had a lot of offers to buy her but we are quite happy to keep her for ourselves, she is just great!”, he added.

After a very successful week with a lot of top placings with his talented string of horses at La Coruña, today’s winner is now hoping to get the chance to collect some more points towards qualification for the Longines FEI Jumping World Cup™ 2022 Final next April. For now however he and his horses are taking a Christmas break. “We won’t be in London (GBR) but I’m hoping to get the chance to go to Basel (SUI) and Amsterdam (NED) in January – we will see”, he said.

Helen on a High in Madrid