Amazing Epaillard doubles up in Madrid

Madrid is a happy hunting ground for Julien Epaillard. The French rider came out on top in the Longines FEI Jumping World Cup™ Western European League qualifier twelve months ago with Billabong du Roumois, and today he did it all over again with another 10-year-old, the extraordinary mare Caracole de la Roque.

At the 2021 Spanish fixture he was on a roll throughout the week before recording that victory and this year he was on flying form once more, winning Friday’s qualifying competition and then trampling the opposition into submission this afternoon. He only had six opponents to fend off last time around, today there were 15 through to the jump-off. But none of the rest could match the turn of foot and accuracy of his classy mare who might have been even quicker but for a momentary safety-check halfway around the jump-off course.

“I’m very proud of her. She has jumped two World Cups and she has won two World Cups, and she won the last seven classes she did – she’s an amazing mare!”

For family reasons it is also extra-special for the 45-year-old rider to do well at this Spanish fixture. “My wife is Spanish and lives in Madrid and my son lives here too and we have many friends here, so it’s important for me to have a good weekend!”, he pointed out after pinning Germany’s Daniel Deusser (Bingo Ste Hermelle) into second, fellow-Frenchman Simon Delestre (Cayman Jolly Jumper) into third and Italy’s Piergiorgio Bucci (Cochelle) into fourth place.

The line-up for this sixth round of the series was really strong, and amongst the 15 through to the second-round decider was the current world number two rider and reigning Longines FEI Jumping World Cup™ champion Martin Fuchs from Switzerland partnering The Sinner.

After his foot-perfect first round Fuchs said, “it’s a good feeling to be clear in a World Cup and this is my first one of the season. The Sinner is a real fighter, he has such a good attitude, he always tries his best. There are definitely more talented horses but he is just such a gem – he gives always his everything!”

Ninth into the jump-off he was chasing the target-time set by Epaillard who was second into the ring and left the rest with a very tough task ahead of them. The Frenchman broke the beam in 42.61 seconds but admitted afterwards that he could have been even quicker because he put in an extra stride between the blue vertical – fence seven on the first course – and the following new oxer to which there was a right-hand turn.

That vertical proved critical to the result as, time and again, it fell when riders tried to turn as tight as possible to it. And amongst its victims was another of the French quartet who made the cut into the jump-off, Kevin Staut with Visconti du Telman who finished seventh in the final analysis, and the final partnership of Great Britain’s Harry Charles and Casquo Blue who eventually finished tenth. It was the penultimate oxer that put paid to Fuchs’ chances however.

Series champion in 2014, Germany’s Daniel Deusser was the first to match Epaillard’s clear but his 11-year-old stallion Bingo was almost two seconds off the pace when crossing the line in 44.30 seconds. It seemed the French rider’s compatriot, Simon Delestre, might give him a run for his money, but the electric little gelding Cayman Jolly Jumper spent so much time in the air that the clock showed 44.37 seconds as he raced through the finish with all the poles intact to slot into third place.

And that’s where he stayed when the only other double-clear of the day came from Italy’s Bucci and the 13-year-old mare Cochelle. Theirs was a performance the Madrid spectators will remember for a very long time, because it was nothing short of sensational.

Fault free to the penultimate oxer they met that on a long stride and the super-honest mare had to stretch with all her might to leave it up. But stumbling on landing she pitched her rider up onto her neck so it looked very much like he was about to hit the deck. A hair-raising stride later however she pitched him back into the saddle and, now without his stirrups, he somehow managed to hold on tight and race towards the final vertical to clear it in 45.34 seconds and slot into that fourth place.

Deusser was quite happy with his runner-up finish. “I knew it was impossible for me to compete with Julien after I saw his jump off, so for me today I was competing against 39 riders (there was a field of 40) and I am very happy I won that competition!”, he said.

And third-place Delestre was also pleased. “I was seventh in Lyon and now third here with Cayman in only his second World Cup. Beating Julien is very difficult or even impossible so I am very happy to be third today”, he pointed out. Talking earlier in the day about the mighty little gelding son of the great Hickstead whose enthusiasm for his job is second to none, he explained, ““he’s amazing but you really have to keep your concentration because he’s always aggressive and yet the fences are small for him. He always wants to run and you just have to keep your plan and be really right with him and then he makes a good job”.

Today’s seventh-place finish has promoted Kevin Staut to pole position on the Western European League leaderboard, and with 42 points the French rider is already well set for a place at the Longines FEI Jumping World Cup™ 2023 Final which will take place in Omaha (USA) next April.

“I’m really happy with my mare Visconti, she’s jumping really wonderful since the beginning of the indoor season. She got already some good points in Helsinki and at the last leg in Stuttgart and I’m really happy because the World Cup tour is really something I want to fight for.”

“I’ve been riding Visconti for three years now.”. Staut continued, “last year she was a bit alone in the field of horses to compete at the higher level so she got a lot of experience and I think this year she came back with good performances and is really improving. She is everything, she has no technical issues, she has scope, she’s careful and it’s a pleasure to ride her”, he explained.

Today’s winner Epaillard, who now lies second on the league table, also has his sights clearly set on that trip to Omaha next year, and with 40 points on his scoresheet he’s well on the way to booking his ticket.

Talking about today’s success and his spectacular run of recent form he said this evening, “it is incredible and I am very lucky to have Caracole. I have to enjoy every moment and this is an amazing period of my career. I think that now with 40 points I am only missing a few points for the Final which is a goal for me”.

The 14-leg Longines FEI Jumping World Cup™ 2022/2023 Western European League will reach its halfway point next weekend when the action stays in Spain with a visit to La Coruña.

Stay up-to-date with articles, interviews, videos and much more while following the action all the way to the Final. 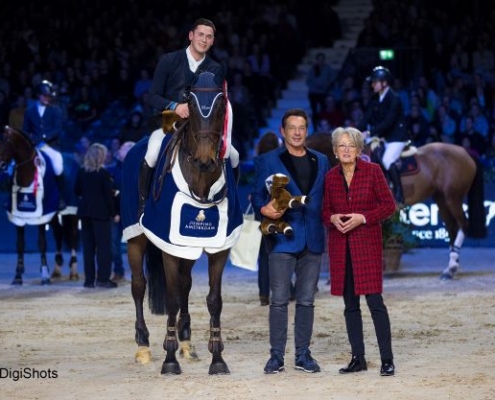 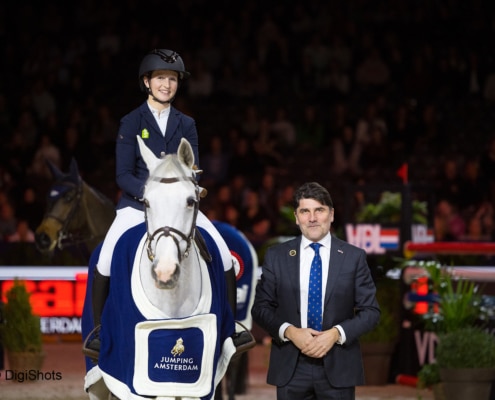 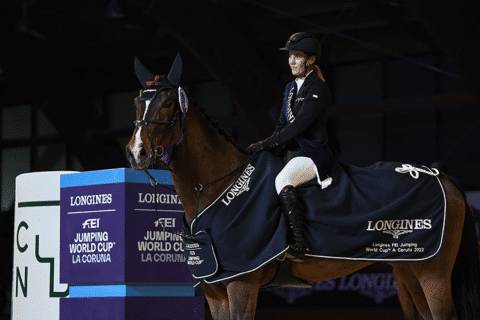