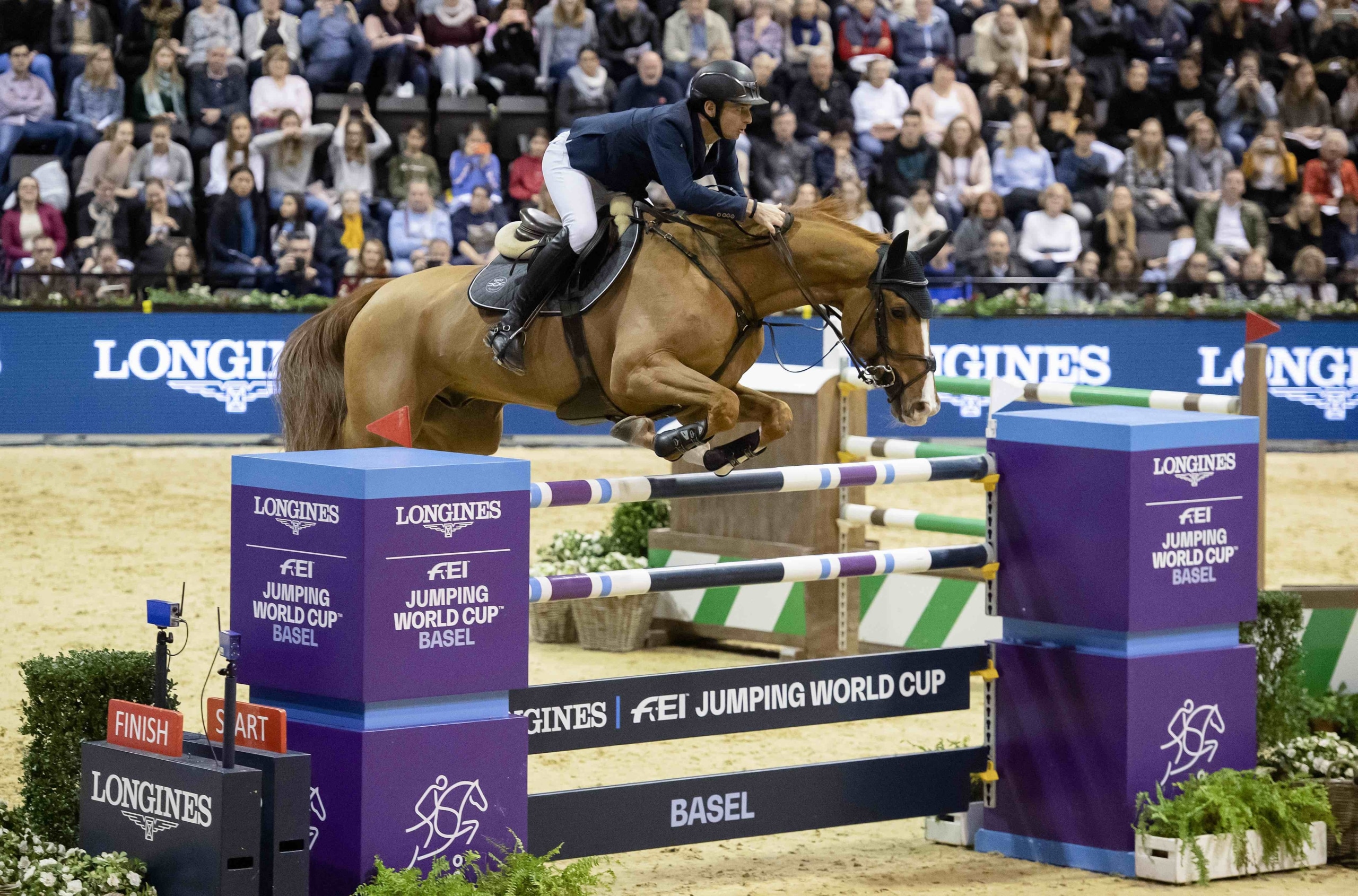 Despite a tough first-round test from ace German course designer Frank Rothenberger, this tenth leg of the league saw 15 of the 40 starters make the cut into the jump-off so it was never going to be an easy one to win. But the man who claimed individual Olympic gold in 2012 and his third World Cup title in Gothenburg (SWE) last season left the rest in his wake, with Frenchman Julien Epaillard coming closest for runner-up spot with Queeletta ahead of Belgiumâs Pieter Devos and Apart in third.

Todayâs success meant a lot to Guerdat who, as 2020 began, slipped just one place from the No 1 spot he held in the world rankings throughout 2019. He was clearly delighted as he kissed his French fiancee Fanny Skalli and their French bulldog, Crapule, with equal enthusiasm when he saw the result go up on the scoreboard.

“Itâs special for a whole combination of reasons – a win close to home at a show that has never been good for me before. I never won or placed in the main classes here so I wasnât expecting much, but on Friday we had an amazing win in the Grand Prix. I wasnât sure about running Victorio again today but he was really fresh, so to end up winning makes it super and he was brilliant in the jump-off!”Steve Guerdat (SUI)

The St. Jakobshalle Stadium was packed to capacity as the action got underway with nine flying the home flag. Just three of them qualified for the second-round decider including Jane Richard-Philips who led the way against the clock with just a single mistake when taking a brick out of the wall, now first on the track, with her game 12-year-old Clipper du Haut du Roy.

Third to go, Irelandâs Mark McAuley and Vivaldi du Theil posted the first clear in 33.52 seconds only to be overtaken by Germanyâs Hans-Dieter Dreher and Prinz who stopped the clock on 33.30. Kevin Staut, one of four French contenders in the closing stages, was hampered by a jink from Viking dâLa Rousserie coming down to the opening wall but matched McAuleyâs time. However Guerdat, eighth to go, blew the whole class wide open when going into the lead in 31.44 seconds despite tapping a few poles along the way.

Irelandâs Denis Lynch, who officially retired the great All Star V on Thursday, produced a lovely smooth round from GC Chopinâs Bushi with which he had claimed runner-up spot in Fridayâs Longines Grand Prix. But their time of 33.27 seconds was immediately bettered by Germanyâs Marcus Ehning who slotted into second place with Cornado NRW when crossing the line in 32.90.

It was still far from over however as French rider Julien Epaillard ousted Ehning when breaking the beam with Queeletta in 31.94 with three really strong partnerships still left to go. Great Britainâs Scott Brash, winner of the Verona (ITA) leg in November, set off with his trademark determination but his angled turn to the vertical that was third on the track this time out came up all wrong, and Hello Senator put down in front of the fence for an uncharacteristic refusal. Second-last was Pieter Devos with the super-fast Apart, but their time of 32.41 would only prove good enough for third while, last in, Belgian compatriot Niels Bruynseels and Delux van T & L left one of the floor. Guerdat had it in the bag and was really pleased with his winning ride.

âI bought Victorio with two friends last year in May/June and we took a while to get to know each other but I always believed he had something more to give. He won a lot at 2 and 3-Star level but we’ve had our ups and downs and at one stage I wondered if he would go all the way. However he was good in Stuttgart (in November) and he really started to give me a super feeling after that over the winter, so when my best horses went for a break I asked him to step up and we got more confidence together.â

The feisty Victorio doesnât look like the easiest ride but, being a true horseman, Guerdat is allowing the gelding the freedom to be what he is, rather than what he might like him to be.

“He used to be like this when winning in France. I thought I could make him smoother but it didnât work out, so I realised I needed to trust him more and let him do it his way, then heâs happy!”

pointed out the Swiss star who, as he added today, now has another string to his bow when deciding which of his top rides he will take as he chases down his fourth title at the Longines 2020 Final in a few months time.

âVenard (de Cerisy) would normally be my first choice but now this horse is another optionâ he said this evening.

Just four Western European League qualifiers are left to go, the next taking place in Leipzig (GER) next Sunday, 19 January.