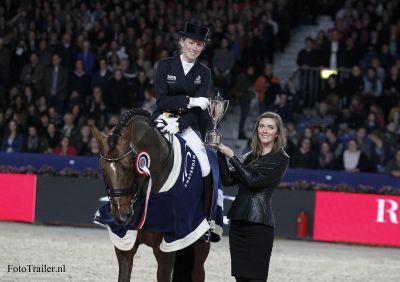 The 2013/2014 Reem Acra FEI World Cupâ ¢ Dressage Western European League is set to begin in just a few daysâ time at Odense in Denmark. And, if the series that carries the name of the Beirut-born New York fashion designer can match the excitement of the past few seasons, then we can look forward to a feast of fantastic sport over the coming months.

The ripple of anticipation is already hanging in the air, and all eyes will be on defending champion Helen Langehanenberg from Germany who realised a dream when holding the trophy aloft for the very first time at the 2013 Final in Gothenburg, Sweden last April. More than ever in recent years, this series has been about exposing new talent, and Langehanenberg and her gifted stallion Damon Hill NRW provide the perfect example of a horse-and-rider partnership that has blossomed under its wing.

Reem Acraâs arrival as title sponsor at the start of the 2010/2011 season coincided with some dramatic changes within the sport. Record-breaking performances have become the norm ever since, and the explosion of public interest in Dressage has corresponded with that. A fresh generation of stars with a massive fan-base have breathed new life into this equestrian discipline which continues to grow and develop with each new season.

The 2014 Final will take place at Lyon in France next April where qualified riders from the Central European, North American and Asia Pacific Leagues will also be eligible to compete. This weekend, competitors from Western Europe will battle for those first all-important points that will put them on the road to the French finale.

Record-books
The record-books show that Dutch riders have been the most prolific winners throughout the 28-year history of the series, with 12 victories in total. But that statistic relies heavily on the extraordinary results achieved by nine-time champion Anky van Grunsven over a 14-year period between 1995 and 2008.

The Dutch contingent entered for Odense this coming weekend is an impressive one, including three of the silver-medal winning team at this summerâs Blue Hors FEI European Dressage Championship which took place in Herning, Denmark.

Germany will be represented by two of the riders who helped clinch European team gold for their country for the 22nd time this summer. Team rookie, 23-year-old Fabienne Lutkemeier, produced a fantastic performance from DâAgostino to set her side on the road to their narrow victory over the Dutch at Herning, but she begins her Reem Acra FEI World Cupâ ¢ Dressage 2013/2014 campaign aboard the 14-year-old Qui Vincit Dynamis.

Isabell Werth meanwhile is listed with her European gold-medal-winning ride Don Johnson FRH. This German veteran knows better than most what it takes to win the FEI World Cupâ ¢ Dressage title, with two wins, the first at Gothenburg, Sweden in 1992 and the second in Las Vegas, USA in 2007 and many runner-up placings throughout her long and successful career. Jessica von Bredow-Werndl completes the German line-up with her Dutch stallion Unee BB.

The Swedish duo of Minna Telde with Santana and Tinne Vilhelmson-Silfven with Don Auriello are likely to make their mark, and there will be one rider from Australia, Jessica Greelish (Lancaster).

Danish riders will be determined to do well on home ground, and two of the team that finished just outside the medals when fourth at this summerâs European Championships will be in action. Anna Kasprzak (Donnperignon) will be riding the horse she took to Herning, but Nathalie zu Sayn-Wittgensteinâs great friend, Digby, was retired at the event so the 11-year-old mare, Fabienne, will attempt to follow in his footsteps with the Danish Princess on board. Malene Folmer Jensen (Acapello Foldager), Nanna Skodborg Merrald (Millibar), and Thomas Sigtenbjerggaard (Nintendo) complete the Danish line-up.

The Ground Jury at Odense will be headed up by Denmarkâs Hans-Christian Matthiesen. Foreign Judge is Annette Fransen Iacobaeus from Sweden and the remainder of the Ground Jury are Americaâs Charlotte Bredahl, Great Britainâs Isobel Wessels, The Netherlandsâ Mariette Sanders van Gansewinkel, Denmarkâs Susanne Baarup and Raphael Saleh from France.

Eight Qualifying Rounds
The Western European League series runs over eight qualifying rounds, with Odense followed by Stuttgart, Germany and Stockholm, Sweden in November. The hugely popular Christmas fixture takes place at Olympia in London, Great Britain in December, and if Olympic and European double-gold-medallists Charlotte Dujardin and Valegro step into the ring in front of their home crowd at the London fixture then the atmosphere will be more than electric, as it was here that the sportâs most dynamic duo produced a record-breaking score in the Grand Prix at the 2012 fixture. They went on to break it once again at Herning in August when posting a colossal score of 85.492, so who knows whatâs in store as the new season progresses.

At each Reem Acra FEI World Cupâ ¢ Dressage qualifier, and again at the Final, the points-earning Freestyle is preceded by a compulsory Grand Prix test.

Amsterdam in The Netherlands will open the new year while Neumunster in Germany and Gothenburg, Sweden play host in February before the series returns to Holland for the last qualifier at âs-Hertogenbosch in March.

Lyon provides the perfect venue for the Final, but only defending champion, Helen Langehanenberg, is guaranteed a starting spot there. All others must earn their chance to challenge for the biggest prize in indoor Dressage, and we can expect plenty of excitement and top-quality sport before the new Reem Acra FEI World Cupâ ¢ Dressage champion is confirmed.