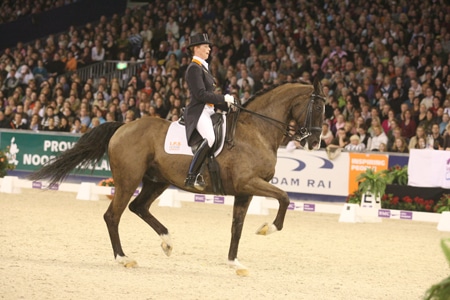 In the week before Jumping Amsterdam all Dutch press, radio and television had commented on the new Freestyle of Olympic champion Anky van Grunsven composed by Wibi Soerjadi, a Freestyle that is supposed to be Van GrunsvenÃ¢â¬â ¢s new Olympic hit. From last week on the music even can be downloaded from the website of Soerjadi and Van GrunsvenÃ¢â¬â ¢s own website. For the second year the virtuoso was in Amsterdam to witness the performance of the Freestyle he composed. And for the second year he could celebrate the win! Last year Imke Schellekens-Bartels was the winner, this year Anky van Grunsven took over the lead.

The chairman of the judges Wim Ernes praised the riders. As the tension always builds up towards a final, a very strong field of competitors had entered the Amsterdam Horseshow. âThe first three were of a very special level. Anky, Imke and Kyra, they all were top of the bill. However they were followed by a strong second part with good competition. Especially Dutch StÃ©phanie Peters showed great progress. Another surprise was British Camilla Sygallâ, Ernes commented. âAfter a bit of an insecure start due to the very enthusiast but noisy crowd and some flashlights, I felt very happy with my horse IPS Salinero and my test, my debut for the Dutch of my new Freestyleâ,   Anky van Grunsven said.

It can be considered as something very special that two individuals, not sharing the same high level of knowing the details of each otherâs skills and profession and managing their own companies, at their own expenses have found each other again in emotion. âEverything is made to measureâ, Soerjadi explained. âItâs not about listening to the music, itâs about feeling the music.â Van Grunsven agreed: âEspecially when I make the transition from the walk into the canter I feel a very special harmony and emotion. I am totally happy with my new Freestyle music now. We have changed it a little after my first ride in London. Together with the continuing developments and growth of Salinero, I cannot think of a nicer piece of music now than this one.â

Just like in Mechelen, Imke Schellekens-Bartels became the runner up twice. Today she blamed herself totally for the mistake in the second pirouette. âI made an expensive mess around the second pirouette. Hunter Douglas Sunrise is not to blame, she gave me a great feeling. Another thing I noticed is the rhythm of the canter and my music. The canter is starting to change a bit. Probably we have to work a little on that in the Freestyle.â Riding the last qualifier in NeumÃ¼nster doesnât fit in the training schedule of Schellekens. âRiding the World Cupâ ¢ Final in my home country would be great. In the standings three Dutch are ahead of me. Probably a wild card can be considered by the World Cupâ ¢ Committeeâ, Imke Schellekens-Bartels hopes. Kyra Kyrklund said that to get as high as possible at the Olympic ranking list is her first objective. She will ride in NeumÃ¼nster in the last World Cupâ ¢ qualifier of the Western European League. âIt looks like I have a good chance of competing in the Final after a good ride in NeumÃ¼nster as well and of course Iâll take my chance thanâ, Kyrklund stated. Her Cabaret-music is very well fitting to the horse that went in great harmony but sometimes could be a little more loose to the opinion of the judges. âTo me the relaxation and harmony of Max and Kyrklund was outstanding. But I rewarded the music of Schellekens-Bartels with 0,5 more because of the degree of difficulty, also in timingâ, chairman Ernes explained.

The audienceâs biggest applause however was reserved for Dutch rider Jeannette Haazen. Together with her impressive Horse Nartan and coached by her husband and trainer Chris, she finished eleventh. Her entry is just a miracle. Last November when driving to the first World Cupâ ¢ Qualifier in Odense, Denmark, she crashed into an unlit, stationary car. Following major surgery and hospitalisation the couple was present again at the sixth World Cupâ ¢ qualifier in Amsterdam. Chris Haazen can not yet walk properly, but still manages to coach his wife. âThey had no place for us in heaven yetâ, Haazen joked, just being happy to be present again. Some competitors this time had to cancel their participation. Swiss Silvia IklÃ© who has been in the news recently because of her drop out of the Olympic Games now stayed at home because of some fractures due to a nasty fall on the floor when teaching.   Amsterdam and Laurens van Lieren do not seem to hit it off.