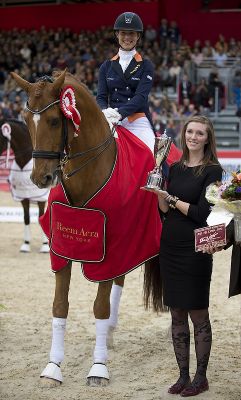 Defending champions, Adelinde Cornelissen and Jerich Parzival, once again stamped their authority all over the opposition when racking up their second successive victory in the Reem Acra FEI World Cupâ ¢ Dressage Western European League qualifier at Lyon in France tonight. The Dutch partnership scored a massive 89.375 to leave them well clear of runners-up Valentina Truppa and Eremo del Castegno from Italy, while it was a very satisfying day for Kristina Sprehe who slotted into third with Desperados FRH.

Asked tonight if competing with Jerich Parzival is a more enjoyable enjoyable experience these days, Cornelissen, who was described as âThe First Ladyâ during the press conference, referred to the change in the character of her 15 year old gelding. âYes, heâs not nearly as spooky as he used to be, he doesnât worry and heâs much more relaxed so I can work on his self-carriage and suppleness – and itâs nice that everyone is noticing the difference and that they are liking it!â she pointed out.

Continuing FormShe gave notice of her continuing form with victory in yesterdayâs Grand Prix in which her Dutch colleague, Edward Gal, lined up second with Glockâs Undercover. Galâs performance today however was only good enough for fifth place with a mark of 79.125.

Re-set the Parameters
Sprehe was still out in front with just three left to go, but this group would re-set the parameters, led by Cornelissen who was third-last into the arena. Parzival is oozing confidence these days, and as he breezed through the test that he now knows so well it was clear that the new signals he is getting from his rider are being better understood. After their victory in the first leg of the Reem Acra FEI World Cupâ ¢ Dressage series in Odense two weeks ago, Cornelissen explained that her effort to lighten her riding style so that she can produce an even more pleasing picture for the panel of judges had led to some moments of confusion for the big chestnut horse. But this time the transitions were seamless, and there was little doubt about who would come out on top as their big result lit up the scoreboard.

Port of Call
Cornelissenâs next port of call is Stockholm, Sweden at the end of the month, but before that, the Reem Acra FEI World Cupâ ¢ Dressage series moves to Stuttgart, Germany on 16/17 November. 000The defending champion has already shown that she and her great gelding are in a class of their own again this season, and that the possibility of mirroring the horse-and-rider hat-tricks recorded by her fellow-countrywoman, Anky Van Grunsven, who steered Bonfire to victory from 1995 to 1997 and Salinero to three-time success between 2004 and 2006, is far from a distant dream. It is a very strong possibility for the 2011 and 2012 series champions.