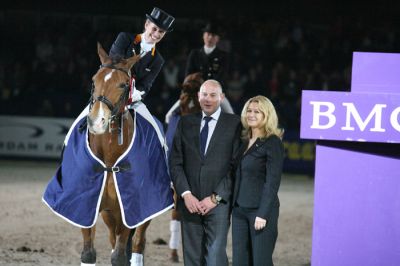 The celebration of the 50th edition of Jumping Amsterdam, itâs fifth anniversary, received extra attention by the surprising victory of the Dutch triple individual gold medallist Anky van Grunsven aboard her black stallion IPS Painted Black. The environment for the sixth World Cupâ ¢ Qualifier in the Western European League was a sold out house of 5000, a field of participating riders with the strength of the Final already and a growth in prize money for dressage.

Not Dutch Adelinde Cornelissen aboard Parzival after her hattrick by winning the World Cupâ ¢ qualifiers in Stockholm, London and Mechelen, nor Grand Prix-winner Isabell Werth aboard Warum Nicht FRH could celebrate the win. Anky van Grunsven aboard IPS Painted Black was almost astonished herself as the 81,25% was a record score for the impressive black stallion. âThis was the very first time that IPS Painted Black did show in the arena what he is capable of and what he shows at home. He so often is not with me in the big arenaâs. Last summer I could celebrate the win in Lingen aboard Painted with 80%, but this test in Amsterdam even went better now. Although we had an expensive mistake in a pirouette yesterday and had to leave the Grand Prix victory to Isabell Werth, I already was most pleased with Painted as he really was working for me and cooperative. Today he again did prove this. We only had a small mistake in the two tempi changes now, so improvements still can be made. However the biggest improvement is that Painted still has gained power and strength and thatâs what makes him better.â

IPS Painted Black never has done his piaffes so energetic and powerful in the show arena before. Anky van Grunsven signed a contract at the Mechelen World Cupâ ¢ qualifier short after Christmas with her new sponsor food producer Cavalor. He supplied her with individual diets for all her horses. âThis might be the cause for the visible improvement of Painted, as my horses lose weight and their bellies and gain spirit and energyâ, she concluded smiling. The only problem for her now seems the FEI World Cupâ ¢ Dressage Reglement that has the rule that last yearâs winner is automatically qualified when having showed in two qualifiers. âMy schedule is to compete with IPS Salinero in the last qualifier in March in âs-Hertogenbosch only and not to show in NeumÃ¼nster or GÃ¶teborg. I am not going to compete unless Salinero is top fit and he still needs more time. He has had a long holiday. Probably I can do a request for a wild card, otherwise the sad truth is that Iâm not competing in Las Vegasâ, Anky concluded.

Dutch Adelinde Cornelissen was faced with major problems in the Grand Prix yesterday when her horse Parzival was disturbed by rumour and flashlights and got scared to death. She was not able to finish her test and retired.Isabell Werth had some major problems in her ride today. In the start of her Freestyle Warum Nicht FRH in the first half pass lost the trotting rhythm and cantered instead. The answer of Isabell was riding less energetic as she usually does, which caused more mistakes, a big mistake in the one tempi changes and a little one in the two tempiâs. The result was the runner up position. Isabell said: âMy âHannesâ was better than me today. I donât know why I disturbed him in the half pass, probably I came in with my aids too fast. Than the mistakes in the changes occurred. It happens. Next time better!â Isabell Werth plans to compete Satchmo in NeumÃ¼nster and âs-Hertogenbosch. After that she will decide which horse to bring to the FEI World Cupâ ¢ Dressage Final in Las Vegas.

Olympian Hans Peter Minderhoud aboard Exquis Nadine overall felt not very satisfied with his third place. The mare had wonderful extensions and half passes, however Hans Peter had his hands full. âShe is a bit in season and was not too easy to handle. Probably it looked good, however I have had a better feeling in London for exampleâ, he said. A better feeling in London also had Kyra Kyrklund. She said: âMax improved in strength and he really takes me. Unfortunately today he left me alone in a pirouette. Too bad. We all play with the limits and this can happen.â

Apart from Anky van Grunsven the most happy Dutch rider was Jeannette Haazen. She was playing with the limits with her big Nartan as well but succeeded. No single step failed and tghe piaffes were done as never before. âThis was my best test ever!â, the small Jeannette smiled who recovered from a very bad carr accident in the beginning of last yearâs World Cup season. âIt all fitted like a T. A big reward for our perseverance.â Chair of the judges Wim Ernes praised the competitors who gave the judges an exciting time to judge. âNo one of us could guess in forehand who was going to win with this first class field. It was great fun to judge!â Also show director Rogier van Iersel praised the riders. âThe riders make the competition and they took care of a thrilling spectacle. Itâs the nicest present show organisers can receive so I really want to thank them for that!â