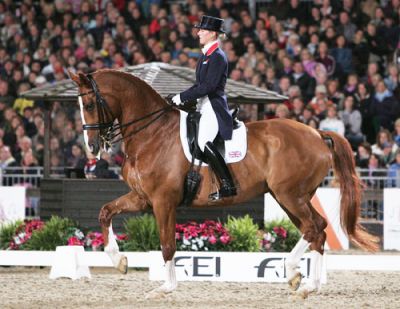 “I’m thrilled”, said Bechtolsheimer, “we won the Grand Prix here last year, but we have never won the Freestyle, and this is such a special show – the home crowd are great. It means everything to have won this competition!” she added. Talking about her ride, Bechtolsheimer said of Mistral Hojris, “he was awesome today, and we had no mistakes. I’m so happy to have that security with him again”. Since Kentucky last year she has found it difficult to find similar form, but tonight has changed all that.

Dujardin followed Bechtolsheimer into the ring, and with Valegro showing huge trot extensions and wonderful piaffe she scored 83.700 to slot into second place. “I was very pleased with my test, Valegro was a little bit hotter than yesterday” she pointed out. “He went in with a bit of tension tonight, and I didn’t make my halt at the beginning and made a mistake in my ‘twos’ and in my ‘ones’, but managed to repeat them” she explained. “It’s only my second Kur with Valegro, and for a nine-year-old to go in and do that is incredible!” she added.

Next to go was Davison, whose 12 year old gelding, Hiscox Artemis, produced a smart routine. It was clear his mark of 75.050 would keep him well in the frame. With just two to go, Hester set off with the 10 year old stallion Uthopia, and the crowd held their breath as he produced lovely passage and piaffe and amazing extended trot for a score of 83.450. “I think my horse went the best he could today” Hester said. “When you are starting at the bottom with these horses, then degrees of difficulty have to be improved on – I didn’t think there was much I could improve on tonight” he explained.

Ground Jury President, Great Britain’s Stephen Clarke said: “This is all a dream come true from a national point of view” he said. “The riders tonight did a great job, congratulations to all three for such huge scores, it was a fantastic competition. It was just a half a point here and there. Laura’s fantastic impulsion and no mistakes, a fantastic job, Charlotte with this elastic-band of a horse, unfortunately she had a couple of small mistakes – and Carl with his super-star that is still up-and-coming – he did a fantastic job with the horse tonight, he looked after him and gave him such a good ride but took less risk than the other two” he explained.