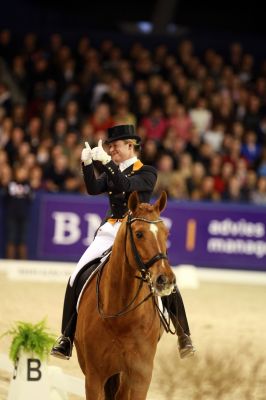 Defending series champions, Adelinde Cornelissen and Jerich Parzival from The Netherlands, scored an emphatic victory on their seasonal debut at the sixth leg of the Reem Acra FEI World Cupâ ¢ Dressage 2011/2012 series in Mechelen, Belgium. With a performance that oozed class and confidence, they threw down a score of 85.325 that left them more than five points clear of the runner-up partnership of Patrik Kittel and Watermill Scandic. But it was the Swedish rider who took maximum points to rocket even further ahead at the top of the leaderboard with just three more legs left to go.

As winner of the 2010/2011 Reem Acra FEI World Cupâ ¢ Dressage title, Cornelissen is already qualified for the 2011/2012 decider which will take place on her home soil at ‘s-Hertogenbosch next April, and is therefore not entitled to accumulate points in the current season. Kittel, meanwhile, looks likely to have three horses to choose from going to the final following a highly impressive run of form in recent months.

Germany’s Nadine Capellmann slotted into third today with Elvis, while Dutchman Hans Peter Minderhoud finished fourth with Withney van het Genthof. Best of the strong Belgian contingent was Jeroen Devroe who steered Apollo van het Vijvershof into fifth. Amsterdam (Jumping Amsterdam) provides the next port of call for the Reem Acra FEI World Cupâ ¢ Dressage series in three weeks’ time and the home crowd will, no doubt, throng to see their champion on her home turf.