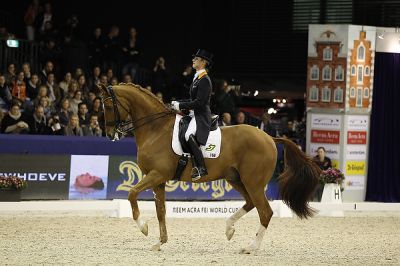 Adelinde Cornelissen and the 15 year old Jerich Parzival stamped their authority all over the seventh leg of the Reem Acra FEI World Cupâ ¢ Dressage 2011/2012 Western European League on home turf in Amsterdam, The Netherlands this afternoon. With a display of supreme confidence, the defending champions threw down the highest score of the season so far to make it a back-to-back double following their victory in Mechelen, Belgium last month.

But with the maximum 20 points going to the second-place rider, as the previous yearâs winners do not collect points during the following season, there was a tremendous battle for the minor placings. And it was Helen Langehanenberg who came off best in a tussle with German counterpart Isabell Werth who had to settle for third place despite one of the most exciting performances of the day.

Leaderboard
Todayâs result has moved Langehanenberg into third on the series leaderboard with just two qualifying rounds left to go. And there is a new leader, as Italyâs Valentina Truppa, who finished fifth this afternoon, has ousted Swedenâs Patrik Kittel from the top of the table.Cornelissen and Parzival also won yesterdayâs preliminary Grand Prix which attracted 22 starters. But the Dutch duoâs winning score of 80.936 paled into insignificance compared to todayâs 87.050 in the Freestyle to Music. The 15-strong star-studded field really raised their game to present an afternoon of high-quality competition, but none could match the class of Cornelissen and her mighty chestnut gelding.

Keen Battle
There is a keen battle amongst the German contingent for a starting spot at the Reem Acra FEI World Cupâ ¢ Dressage Final which will take place in âs-Hertogenbosch, The Netherlands next April. And Nadine Capellmann did her chances no harm with a lovely test that led the way at the halfway stage today. She left the considerably more-experienced Elvis at home in Aachen, and instead brought out her 11 year old Gribaldi mare, Girasol 7, who produced some lovely work throughout a calm, quiet and happy test that was full of lightness and life to earn a mark of 76.200.That remained the target score until Truppa, winner at the fifth leg of the Western European League in Frankfurt (GER) in December and at Lipica (SLO) earlier last year, swept into the lead when Ground Jury members Stephen Clarke (GBR), Susie Hoevenaars (AUS), Wim Ernes (NED), Mariette Sanders van Gansewinkel (NED) and Jacques van Daele (BEL) awarded 76.775 for her test with Eremo del Castegno. But then Dutch star, Edward Gal, really pleased the home crowd with a dramatic performance from the 13 year old mare Sisther de Jeu whose extravagant extended trot and big piaffe helped put 79.875 on the board.

Swaggered
Their lead wouldnât last long, as Cornelissen and Parzival swaggered down the centre line to take command in no uncertain fashion. Cornelissen insists she can never be sure she can win when she goes into the ring, but admitted this afternoon that Parzival âjust keeps getting better and better and better! He continues to amaze me, he still gets better every dayâ she said – alarming news for her opponents ahead of this big Olympic summer. Isabell Werth refused to be intimidated by the Dutch riderâs score however, and set off with gusto to produce a spectacular test from El Santo NRW. The bay gelding powered through extended trot, passage and canter pirouette, and Werthâs enormous smile after saluting the judges said it all – 81.625 would definitely ensure she would finish in the frame. But with those tantalising 20 points still up for grabs, it was Langehanenberg who came closest to Cornelissenâs score as, second-last to go, the 12 year old stallion, Damon Hill NRW, showed his class to put 83.150 on the scoreboard. âThe feeling today was really good – even better than yesterdayâ Langehanenberg said afterwards. âMy horse loves to perform in the arena and he really fought for me and I loved it!â said the rider who plans one more Reem Acra FEI World Cupâ ¢ Dressage outing – at Neumunster, Germany next month – before the the Final.

Delighted
Third-placed Werth was delighted too. âI really enjoyed the rideâ she said. âWe had a few little mistakes, but the piaffe improved, although it can be better still. He (El Santo) becomes more and more powerful and is growing in confidenceâ she added. She is also planning to compete in Neumunster, but is unsure whether she will take El Santo or the veteran, Warum Nicht, to the Reem Acra FEI World Cupâ ¢ Dressage Final. Thinking ahead to the summerâs Olympic Games and which horse she will compete in London she said, âIâm in a comfortable position – I am focusing on improving the two younger horses right now – we will seeâ.Cornelissen talked about her test today – âI canât say he did bad – can I?â she quipped. âHe was a bit spooky in one corner, but you can make your own programme and avoid it. Of course there are things that can go better, but so far I am satisfiedâ she explained. She is working on a new Freestyle, but is not sure when she will ride it in public for the first time.

Perspective
Todayâs Judge at C, Wim Ernes from The Netherlands, put the competition into perspective during the post-competition press conference. âIâm still excited!â he said. âAs judges we had the opportunity to judge riders of such quality – Adelindeâs test has the high degree of difficulty, Helenâs is filled with elegance and her stallion has such super gaits, Isabell put on a super riding performance – Iâm really pleased you went to the limit and tried to beat the other ones – you went over the limit really, but thatâs what sport is!â he said to Werth.He commented on the early departure of Swedenâs Minna Telde and the stallion, Santana, who retired when the horse became upset during his test. âIâm very sad for herâ Mr Ernes said. âWe have to ring the bell after 20 seconds, she had several times of resistance and we tried to give her time to recover. The horse has only one eye, and I think he heard or saw something. We were ready to ring the bell but she withdrew at the same moment – at the end she couldnât go onâ. He understood that Parzival also found something in the arena that he didnât particularly like – Cornelissen said it was âon the short side, at Aâ and that a number of horses got tense at that part of the arena but that she has learned to ride him through these situations. âWeâre not searching for mistakesâ Wim Ernes pointed out, âwe try to see the good things!â.There were plenty of good things to see in the RAI Arena at Amsterdam today, but Cornelissenâs performance was the best of all. The Dutch rider, whose boyfriend and manager Sjaak van der Lei held onto Parzival as she accepted her prize today from Lelle Henrichsen, Reem Acra Vice President, says that her challenge now is to find the right balance of competition and rest for her super-star over the coming months. âI may take him to Gothenburg to give him one more run before the Final in April – Iâm considering all the optionsâ she said, âbut the Final is very important. First of all itâs in Holland, and secondly I won last year so I feel I have to compete and defend my titleâ. She and her chestnut bundle of abundant energy will certainly be the ones to beat.