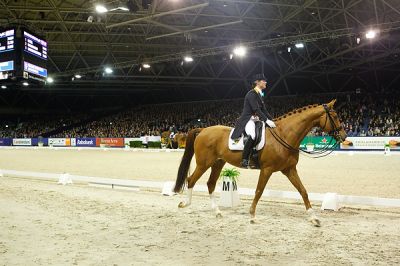 In one of the toughest battles so far this season, Adelinde Cornelissen and Jerich Parzival held on to win the seventh leg of the Reem Acra FEI World Cupâ ¢ Dressage series in Amsterdam, The Netherlands today. Winner of yesterday’s Grand Prix, the Dutch star was firm favourite going into the competition. But Germany’s Isabell Werth pushed her all the way with a great performance from Warum Nicht while Sweden’s Patrick Kittel and Watermill Scandic finished a close third.

Underlining the quality of today’s competition, just over six points separated the top seven riders and it is clearly now shaping up to a classic finale in Leipzig, Germany in three months time. Kittel showed however that the result may not necessarily be decided between the traditional protagonists from Holland and Germany. On today’s form, he will be chasing the Swedish dream of measuring up to the third-place finish of Jan Brink and Briar at the 2006 final in Amsterdam and even pushing for the ultimate accolade achieved by Louise Nathhorst and LRF Walk on Top on her home turf in Gothenburg back in 1998.

HALFWAY STAGE
It was the host nation’s 2010 Alltech FEI World Equestrian Gamesâ ¢ team gold medallist Hans Peter Minderhoud who was out in front at the halfway stage with a score of 75.700 riding IPS Tango. And, just as he had done the previous day, Dutch counterpart Sander Marijnissen produced a smooth, relaxed and eye-pleasing test from the bright chestnut Moedwil as the action restarted with just seven of the 15 contenders left to go. His mark of 73.750 would not challenge for the lead, but Belgium’s Jeroen Devroe and the handsome Apollo Van het Vijverhof slotted temporarily into second place with a mark of 75.250 with solid piaffe, lovely extended trot and strong piaffe and passage to finish their programme. Kittel however rocketed to the top of the scoreboard as his 12 year old stallion produced extravagant half-pass, passage that was straight and true and relaxed canter changes all set against a great rhythm, and his huge smile as the rider raised his hat on halt told the whole story. His score of 79.000 was always going to be one that would count. With just four left to go, the consistent German partnership of Helen Langehanenberg and her 12 year old mare, the aptly-named Responsible whose huge step in walk and easy canter changes were a pleasure to behold, put 75.550 on the board but Cornelissen then blew the rest away despite some tension in her test with Parzival.

MORE RELAXED YESTERDAY
The big gelding was much more relaxed yesterday in the Grand Prix – “this was not the easiest test for me I can tell you!” Cornelissen said afterwards. “I don’t want to make excuses, but I think he found the prize-giving yesterday just too much and when I turned him into the arena today I could feel his tension and I thought Oh My God! what am I going to do here??!!” she explained.”I had to convince him that he could still get through his work and the only thing I can say is that I am happy he trusted me and got through it in the end. Two years ago he wouldn’t have been able to do that, so I’m pleased about that” she added. For all her concern however, the big gelding’s powerful performance was still good enough to put a mark of 81.475 on the board. The question now was – could multiple champion Isabell Werth, already a double winner in this season’s Reem Acra FEI World Cupâ ¢ Dressage series, overtake her?Werth certainly gave it a good shot, Warum Nicht’s great walk and extended trot racking up the scores, and it was clearly going to be a close-run result. However a full point separated the two, and the Dutch rider had the advantage when the marks came in, while, last to go, Great Britain’s Richard Davison had to settle for fourth place with a score of 77.150 from Artemis after executing his programme with great accuracy.The Dutch may have taken today’s big prize but it is the Germans who hold the firmest grip on the leaderboard going to the next leg at their home fixture in Neumunster in four weeks time. Today’s result leaves Werth on level-pegging with fellow-German Ulla Salzgeber at the top of the league table, each now carrying 74 points, while Cornelissen, who has now scored a hat-trick of wins in the current series, has moved into third place with 63 ahead of Minderhoud in fourth on a score of 58, and Davison next in line with 57.