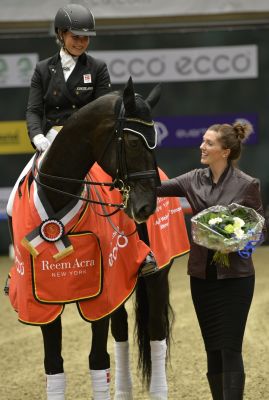 Danish rider, Anna Kasprzak, secured her first-ever Reem Acra FEI World Cupâ ¢ Dressage Freestyle victory on home ground at Odense in Denmark today where the 2013/2014 Western European League got underway. Already strongly tipped for a top placing following their convincing win in yesterdayâs Grand Prix in which they pipped Germanyâs Isabell Werth and Don Johnson, the dynamic Danish duo returned to make it a back-to-back double of successes when pinning Swedenâs Tinne Vilhelmson-Silfven and Don Auriello into runner-up spot this afternoon. Werth lined up third this time out while the host countryâs Nanna Skodborg Merrald made a big impression when finishing fourth with her 11-year-old gelding, Millibar.

The 15 competing riders represented seven nations at the season-opener. Riders from Austria, Denmark, Germany, Netherlands, Norway, Sweden and USA were in action, and it was an impressive show of strength by the home side. Kasprzak has been producing increasingly strong results since taking up the ride on Donnperignon two years ago. âWe competed in our first international competition together in February 2012 and it has been an amazing story ever sinceâ said the 23-year-old rider today. âItâs hard to believe what we have achieved in our short time together!â she added after placing herself at the head of the world-class field.

Expectation
In the tense atmosphere of the Fyn Arena, Kasprzak was third-last to go, and the stadium was filled with anticipation as she entered the arena. Vilhelmson-Silfven had set the target at 80.075 with a lovely performance from Don Auriello, but Kasprzak squeezed ahead when scoring 80.575 to the strains of her Phil Collins musical score. âOur trot-work was good, and the passage and piaffe were better and more powerful todayâ the Danish rider said afterwards. âIn the passage I could just sit there and ride with him, it felt really great!â she added. She felt the transitions from passage to piaffe were also improved, âbut I made a big mistake in the 2-tempis!â she admitted, âhe got a little behind me, but that was the only thingâ.

The home crowd let her know just how much they appreciated her effort with rapturous applause before Werth and Don Johnson took their turn. And when the multi-medalled German rider, who took team gold riding Don Johnson at this summerâs Blu Hors FEI European Dressage Championships at Herning (DEN) notched up a score of 79.400 when second-last into the ring, it was clear that victory would remain on home soil.

There was still more excitement to come for the home spectators however when, last to go, 19-year-old Nanna Skodborg Merrald posted a mark of 78.325 to relegate Swedenâs Minna Telde and Santana to fifth place. This young Danish rider, who took gold at Junior European level and then this summer won both the Under-25 non-Championship Intermediare ll and Grand Prix classes during the ECCO FEI European Championships at Herning, looks destined for big things with her 11-year-old Danish gelding, Millibar.

Understandably Buoyant
Kasprzak was understandably buoyant following her watershed victory today. âI hadnât expected this result at all before heading to Odense!â she said. âIt has been the best weekend, and yesterday I rode my best Grand Prix to date. Today I had some errors in the flying changes, but my ride followed the music very well. Donnperignon was very energetic today, although not as much as yesterday where it was almost too much!â she added.

Asked about her goals for the near future she replied âmy goal is just to better myself from hereâ. And asked about her plans for Donnperignon she pointed out âhe needs a little break now. He is 14 years old, and I have to be careful with him even though now, at the moment, I have a really good feeling with him. We will take him home and then decideâ she said.

Her climb to prominence has been meteoric. Only six months after their international competition debut she found herself on the fourth-placed Danish team at last summerâs London 2012 Olympic Games where she also placed 18th individually.

This summer, Kasprzak and Donnperignon finished sixth in the Grand Prix and seventh in both the Grand Prix Special and Grand Prix Freestyle at the Blue Hors FEI European Dressage Championships at Herning in August, having lined up fourth in the hotly-contested Freestyle at Aachen, Germany two months earlier.

The Reem Acra FEI World Cupâ ¢ Dressage Qualifier will be organised during Jumping Amsterdam: on Friday 24 January riders will compete in the Grand Prix for a ticket for the Freestyle   Test to Music on Saturday 25 January.