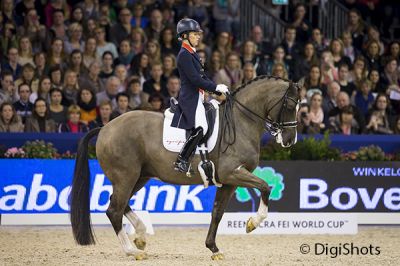 Great Britainâs Charlotte Dujardin and Valegro were like an unstoppable force as they marched to another spectacular victory at the fifth leg of the Reem Acra FEI World Cupâ ¢ Dressage Western European League series in Amsterdam, The Netherlands today. With a mark of 91.275, the Olympic double-gold and individual European Championship winning partnership were 2.7 points short of the world-record Freestyle score they posted at the previous leg at Olympia, London in December. But todayâs result underpins their position at the very top of their game, and sets them firmly on the road to the Reem Acra FEI World Cupâ ¢ Dressage Final at Lyon, France in April.

The start-list was reduced to 14 when The Netherlandsâ Hans-Peter Minderhoud withdrew Glockâs Romanov, but it was another day of sparkling competition. The Dutch crowd was captivated by the British duo who continue to take the sport of Dressage by storm, and there is no doubt that their presence is having a very positive effect as so many others have been encouraged to raise their game again this season, bringing a freshness and energy to the prestigious and long-established indoor series.