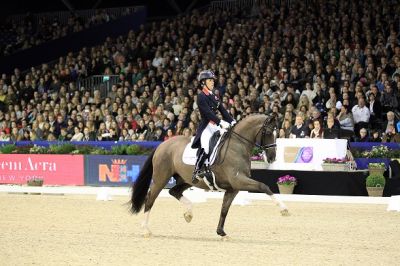 Great Britainâs Charlotte Dujardin and Valegro produced a performance close to perfection when winning tonightâs Reem Acra FEI World Cupâ ¢ Dressage 2014/2015 Western European League qualifier at Olympia in London (GBR) with yet another world-record-breaking score. They set the previous record at the same venue 12 months ago when posting a mark of 93.975, but this evening earned 94.300 for an even more spell-binding display of harmony between horse and rider. And this latest triumph came just 24 hours after the dynamic duo beat their own world record in the Grand Prix in which The Netherlandsâ Edward Gal and Glockâs Undercover also had to settle for runner-up spot.

Dujardin admitted tonight that Valegroâs performance this evening almost brought her to tears. âWhen we were doing the last piaffe/passage I was welling up and I had to say to myself donât cry, donât cry!â she said. âHe tries so hard to get it right, itâs an incredible feeling when you go in there in front of all those thousands of people and he just wants to perform and to give you his bestâ, she added.

The next qualifier for the  Reem Acra FEI World Cupâ ¢ Dressage 2014/2015 Western European League  will be at Jumping Amsterdam!