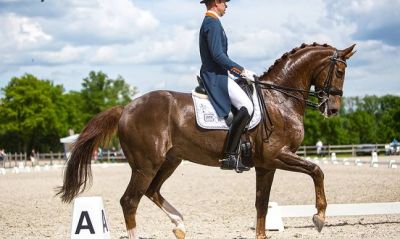 Tinne Vilhelmson-Silfven steered Don Auriello to victory in todayâs fourth leg of the Reem Acra FEI World Cupâ ¢ Dressage 2014/2015 Western European League at Stockholm in Sweden. In yesterdayâs Grand Prix it was Hans Peter Minderhoud who came out on top with Glockâs First when posting a personal best score. In todayâs Freestyle however the Dutchman had to settle for runner-up spot while Swedenâs Minna Telde and Santana sealed third spot.

âIâm really pleasedâ said six-time Olympian Vilhelmson-Silfven this afternoon. âHe (Don Auriello) was in over-drive yesterday in the Grand Prix because this is our first show since the World Championships and he was a feeling a bit too happy! Today I was maybe a little bit careful, but anyway Iâm delighted with our result!â she said.

Very happy
âIâve scored 84 before in Freestyle so this isnât our biggest result ever, but Iâm very happy!â said Vilhelmson-Silfven afterwards. The 47-year-old Swede spent much of last winter in America, and sheâs planning to do the same this time around. âIâm leaving for Florida on 21st December again so Iâm not sure about qualifying for the Finalâ she pointed out. âI can only count one World Cup qualifier over there and I missed Odense (the first leg of the current Western European League series) so Iâm not sure itâs going to happenâ she explained.

Second-placed Minderhoud said he was very pleased with his ride today. âI knew it would be difficult to beat Tinne if she was on form, even though I made no mistakesâ he pointed out. Talking about Glockâs Flirt he continued, âhe is very easy to train and not spooky so that always makes them easier to deal withâ, and heâs hoping to make it to the Reem Acra FEI World Cupâ ¢ Dressage Final 2014/2015 in Las Vegas, USA next April. âIâd really like to get there, but only three riders from each nation can compete and we have quite a few good ones!â he said.

Reaction
Minna Telde was delighted with the reaction of the crowd today. âYesterday Santana was more tense but today he stayed calm and listened to me. This new music is great and I will ride it again in London if I canâ said the 39-year-old who, however, definitely doesnât have the Las Vegas Finals in her sights as she is expecting a new addition to the family next April.