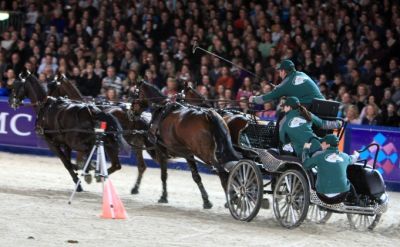 After several years of absence, the carriage driving sport is back on the programme of the international horse show Jumping Amsterdam. On Sunday evening 20th January, IJsbrand Chardon, Theo Timmerman, Mark Weusthof and Hans Heus will enter the Amsterdam RAI arena for a spectacular indoor marathon competition.

Earlier that day, IJsbrand Chardon will start in the FEI World Cup Driving competition in Leipzig, Germany. As soon as the competition is finished, Chardon will head to Amsterdam where he will drive the team of his colleague Herman ter Harmsel.

The four-in-hand drivers will each be added to one of the four Region teams, which is composed of a single horse, a pair horse, a pair pony and a four-in-hand pony. These drivers have qualified at exciting regional competitions to compete at Jumping Amsterdam to represent their Region.

Helped by the top drivers, the four Region teams will battle it out at Jumping Amsterdam so excitement is guaranteed!