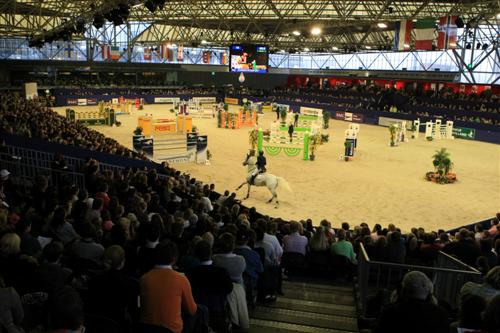 From 22 to 25 January 2009 Jumping Amsterdam will celebrate her 50th anniversary. The new organisation, the reinforced board and the support of, amongst others, Amsterdam RAI, BMC, the City of Amsterdam and Provincie Noord Holland have all contributed to the eventâs establishment of a solid foundation for the future. Accordingly, Jumping 2008 proved to be one of the most valued editions ever.

All 49 editions of the event have taken place at the venue of the Amsterdam RAI exhibition centre. Since 2004, Jumping Amsterdam has been scheduled for the last weekend in January. The fact that The Netherlands hosted two FEI World Cups Jumping in the same part of the season, has never been an issue for the FEI over the past years. However, their point of view has changed. The overall regulations say that, in the case of two qualifications per country, one has to take place before 1 January while the other one should be held after this date.

The FEI requested chairman of the board Hans Bakker to find a new date for the event so that the World Cup Qualification Jumping could be maintained in Amsterdam. âAside from the fact that the Amsterdam RAI is fully booked from October until December, the continuity of the event is the main issue here. Jumping Amsterdamâs date has changed a number of times already and we cannot keep moving the event up and down the calendar. January has proved to be good timing when it comes to riders, audience, sponsors and organisation. It is a shame that as a result there will be no World Cup Qualification Jumping organised by us in 2009. But Jumping Amsterdam will be Jumping Amsterdam. An international top event with great Amsterdam charisma and ambiance. We do not depend on a World Cup Qualification. Furthermore, the situation offers opportunities for a renewed programming.â
Sport Director Rogier van Iersel adds: âIt is a pity that the regulation will be acted upon now. Both FEI representatives and World Cup sponsor Rolex have enjoyed the great entourage and fantastic sport at the well-organised event this year and paid their compliments to the organisation. On the level of sport, Amsterdam will keep up its high standard. The World Cup Qualification Dressage will still be assigned to the event. The Grand Prix of Amsterdam is expected to be shifted to Sunday afternoon. Top riders are keen on coming to Amsterdam and that will not change. Furthermore, the proposed increase of the prize money will be carried through which will guarantee the participation of a significant part of the worldâs best riders. I have confidence in further improvement of quality.â

The 50th edition of Jumping Amsterdam will take place from 22 until 25 January 2009 in the Amsterdam RAI.