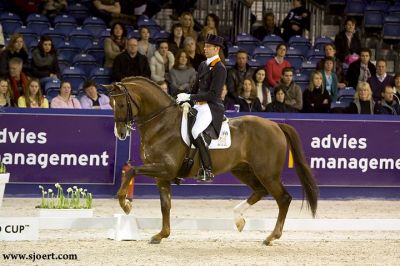 Dutch rider, Hans Peter Minderhoud, was in reflective mood after winning the opening leg of the Reem Acra FEI World Cupâ ¢ Dressage series in Odense, Denmark sunday afternoon with the 11 year old chestnut KWPN-stallion, IPS Tango.  He has his sights firmly set on a place at the series final in ‘s-Hertogenbosch, The Netherlands next April along with a spot at the London Olympic Games, but he knows he has a lot of work to do to get there.

It is a very different story for the Dutchman who enjoyed such a long and fruitful partnership with the great mare, Exquis Nadine, who was retired during the FEI European Dressage Championships in Rotterdam this summer.  He is now working with a horse that is something of a “work in progress” rather than super-experienced, but he was delighted with his result today. “I’m not suprised that he won” the Dutchman said afterwards, “my horse is in good shape – even yesterday when we finished third in the Grand Prix. He is really coming along” he added.First to oust her from pole position was Minderhoud with his son of Jazz. The 38 year old rider was determined to improve on his Grand Prix performance. “Tango was scared of the sunlight coming through the curtains at the in-gate yesterday. I was very eager to ensure he got his confidence back today” he pointed out.

That he did, passing through the curtains without comment this afternoon, and producing some lovely passage and extended trot along with good transitions on his way to a mark of 79.300. “We had little mistakes in the changes, but I thought we would score about 80 per cent so I was very happy with him” Minderhoud said of the horse who has such big boots to fill now that Nadine is retired.