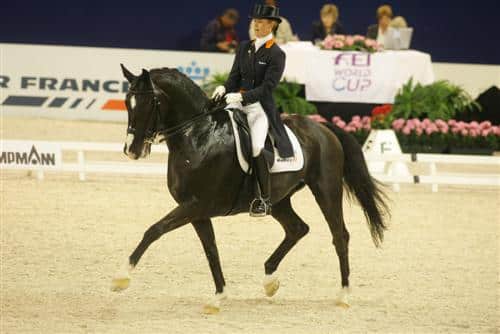 Anky van Grunsven and IPS Salinero won their new Freestyle to music in LondenAfter Anky’s ride she said she felt a bit disappointed when she had left the arena because she sometimes was ahead of the music. âThe good thing was that I felt it and did notice it. And I know the first time cannot be perfect. But still I do hope for a perfect ride, that’s meâ Chairman of the judges Dr Volker Moritz however was full of praise. âIt was a very special atmosphere tonight and I was very impressed by the new Freestyle of Anky van Grunsven. It fitted the horse very well and I rewarded it with very high marks.â Judge Stephen Clarke added: âIt was very subtle, very clever, very difficult. I think this Freestyle has every chance to grow as it needs a little exposure and probably practice.â

Compared to Ankyâs gold winning Freestyle with the French chansons, not only the degree of difficulty in the technical performance has risen, also the degree of difficulty in the music added to the atmosphere and impression. Composer Wibi Soerjadi witnessed the performance himself and said: âThis was not a translation of the movements of the horse into music. It was an expression of emotion. This âDance of devotionâ was played by 70 musicians and had 16 different melodies and voices coming all together to express the endless mastership of this pair. That was what I intended to express.â According to the judges he succeeded in that quite well.

Anky van Grunsven will show her home crowd in Amsterdam an even better timed new Freestyle, she promised. When not having bought tickets yet you better be quick, the Freestyle almost has sold out. Anky’s Dutch debut will be the second debut of music by Wibi Soerjadi in Amsterdam. Lasst year Imke Schellekens-Bartels debuted in Amsterdam accompanied by Soerjadi’s music.