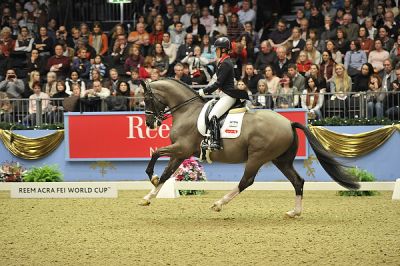 On a night when nerves were truly tested by the close confines of the arena, the pure class of the 2012 Olympic individual and team gold medallists shone through as Britainâs Charlotte Dujardin and Valegro topped the fifth leg of the Reem Acra FEI World Cupâ ¢ Dressage series at Olympia in London. The Grand Hall at this prestigious venue is aptly named, but it is a very snug fit for the dressage ring at the Christmas fixture which attracts packed houses throughout a hectic week of great sport.

As Dujardin pointed out, âat the Olympics there were 24,000 spectators watching, but they were a long way away. Here tonight it was very different, they were so close you could hear them breathing!â, she said after claiming pole position with a score of 87.950.

Runner-up with a mark of 80.075 was double FEI World Cupâ ¢ Dressage champion Isabell Werth from Germany whose performance with the 11-year-old Don Johnson FRH left her well pleased. And it was Dujardinâs trainer and mentor, Carl Hester, who lined up third with a score of 79.900. It was an emotional night for the Briton who shared the top step of the team podium at London 2012 with his 26 year old pupil, because Hester was riding Utopia for the very last time. âHeâll be sold in the new yearâ, the rider confirmed tonight.

Great Expectations
There were great expectations ahead of this fifth leg of the Reem Acra FEI World Cupâ ¢ Dressage 2012/2013 Western European League series. And when Dujardin and her 10-year-old wonder-horse produced another in her long list of world record scores when posting 84.447 to win Monday nightâs FEI Grand Prix, then it seemed anything could happen again tonight. But the FEI World Cupâ ¢ Dressage Freestyle record of 92.3 set by The Netherlandsâ Edward Gal and the fabulous stallion Totilas at Olympia three years ago was never threatened despite some great efforts.

Jumping- Sports Advisor Imke Schellekens-Bartels and the massive 12 year old gelding, Toots, made their canter pirouettes look very easy indeed as the Dutch pair took the lead with a score of 74.875 when seventh of the 15 horse-and-rider partnerships to take their turn. But it was the the 79.900 posted by Hester and Uthopia that they were chasing as the final tranche of riders got underway.

The supreme showman described his performance as âa great last rideâ. He said, âI wasnât emotional coming in, I was quite looking forward to it, but when I finished, you kind of get the feeling for what the horses have done for British dressage, so I did feel emotional coming out. It was a stress-free, enjoyable rideâ he explained. British dressage has indeed been through an extraordinary period of change and amazing success in recent years, with Hester at the very heart of it. Looking back at his spectacular partnership with the 11-year-old stallion Uthopia he pointed out that, âthe plan always was that he was to be sold, but I do always like to remember that I was lucky to keep the horse for so longâ.

No Further Plans
She has no further plans for Valegro at present. “We will sit down and see what’s going to happen in January. He (Valegro) may be sold on, but we are hoping to get a share of him and I’m hoping to koop the ride” Dujardin explained.

Werth said âmy Christmas present is done because we did two very good tests, and today was even better than yesterday.   My horse has improved a lot over the last six months and I hope it will go on like this but we have to work very hard to beat the British again!   To finish second twice with a young horse – I didnât expect it.   And to sit between two Olympic champions is a really good feeling for meâ said the gracious runner-up whose own collection of Olympic memorabilia is not inconsiderable.

While Dujardin and Hester are not planning any further participation in the 2012/2013 Reem Acra FEI World Cupâ ¢ Dressage series, Werth will travel to the next leg in Amsterdam in January.  âI have to do that if I want to have a chance to get to the Finalâ she said. Tonight she took the first big step on the road to Gothenburg, Sweden where she recorded the first of her two FEI World Cupâ ¢ Dressage series victories 20 years ago.