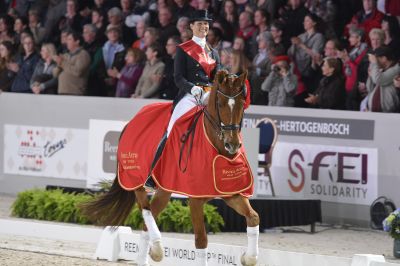 Double-Dutch champions Adelinde Cornelissen and her great gelding Parzival will head up a star-studded field for the opening leg of the Reem Acra FEI World Cupâ ¢ Dressage 2012/2013 series at Odense, Denmark next weekend.

The collection of early points on the road to the series Final that will take place in Gothenburg, Sweden next April, is always desirable. And while defending champion Cornelissen needs only to show that both she and her bright-chestnut horse are in competitive form, the partnership that claimed individual silver at this summerâs London Olympic Games will surely be the ones to beat. They will face strong opposition.

Helen Langehanenberg (GER) was runner-up at the 2011/2012 Reem Acra FEI World Cupâ ¢ Dressage Final in âs-Hertogenbosch, The Netherlands, last April. And Ground Jury President, Ghislain Fouarge, said that day that it was a very close call between the German rider who stood second and the winner, Cornelissen, whose degree of difficulty in the programme of movements selected for her Freestyle test gave her the advantage. Langehanenberg is also scheduled to line out at this weekendâs season-opener to the Reem Acra FEI World Cupâ ¢ Dressage series.

The Freestyle Queen
For many years the queen of Freestyle was The Netherlandsâ Anky van Grunsven who, with nine wins in the FEI World Cupâ ¢ Dressage series over a 13-year period that began in 2008, holds an extraordinary and unchallenged record.