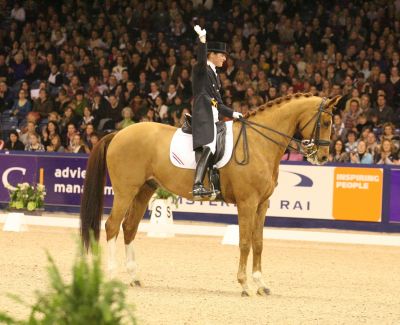 As the Reem Acra FEI World Cupâ ¢ Dressage 2011/2012 season gets underway at Odense in Denmark this weekend (21-23 October), there is a whisper of excitement running through the world of international dressage. This sport, which relies on the technical skills and innate instincts of the riders along with the grace, elegance, willingness and athleticism of their horses and the expertise of a panel of judges, has experienced a tsunami of change in recent years, and the new-found unpredictability of the formerly pedantic discipline has energised it like never before.

For so many years, Dressage was dominated by the same few names, but in the modern era it has grasped the concept of greater engagement with the public without shedding its links to its classical past, and many new stars have been born. The explosive arrival of the sensational Dutch duo, Edward Gal and the stallion Totilas, blew away the cobwebs and shone a bright light into the future as they blazed a trail through the 2009 and 2010 seasons with displays of pure showmanship and energy. That partnership no longer exists, but the legacy they have left behind includes the desire to hold onto the massive increase in public interest created by their star quality.

DEFENDING CHAMPIONS
This year’s defending champions also come from The Netherlands, the country that has, statistically, dominated the FEI World Cupâ ¢ Dressage series with 11 victories over 26 seasons. The popular partnership of Adelinde Cornelissen and Jerich Parzival won through at the 2010/2011 final in Leipzig, Germany last April and went on to add individual gold at the FEI European Dressage Championships in Rotterdam in August. But those Championships heralded more change on the way.

Cornelissen may have stood top of the individual medal podium, but her country had to settle for bronze in the team classification as the British swept to an historic first-ever victory. And the individual silver medallist was Britain’s Carl Hester whose superb horsemanship led top international judge, Ghislain Fouarge from The Netherlands, to comment that it was “exactly what we want to see in the sport!”.

Hester was riding the fabulous 10 year old KWPN stallion Uthopia which is owned by former Irish eventing team member Sasha Stewart, and this pair are expected to make a big impact when they line out later in the Reem Acra FEI World Cupâ ¢ Dressage season. Hester’s pupil and fellow team gold medallist, 26 year old Charlotte Dujardin, also produced some spectacular work from Valegro, both riders displaying a sympathy and lightness of hand that produced freedom of movement to spectacular effect. And it was this that Mr Fouarge was referring to, in terms of desired riding style for the future. The parameters have been re-set once more, throwing down a whole new challenge for all those who will compete in the Reem Acra series over the winter months.

NINE NATIONS
A total of 17 riders from nine nations will line out at the opening leg in Odense this weekend, when the top-15 from Saturday’s Grand Prix will qualify for Sunday’s Freestyle competition. Jeroen Devroe (Apollo van het Vijverhof) and Phiippe Jorissen (Le Beau) will represent Belgium while Finland’s Mikaela Lindh (Skovlunds Mas Guapo) and Great Britain’s Richard Davison (Hiscox Artemis) will also be in action. Nadine Capellmann and Helen Langehanenberg will participate for Germany alongside Japan’s Yuko Kitai (Golden Coin 4) and Norway’s Siril Helljesen (Dorina), while Sweden’s Rose Mathisen (Bocelli), Per Sandgaard (Lomumba Navdal) and Tinne Vilhelmsson Silfven (Don Auriello) will also be hoping to pick up some early points along with The Netherlands’ Hans Peter Minderhoud (IPS Tango) and Jenny Schreven (Krawall).

Flying the host nation flag will be Sidsel Johansen (Schianto), Anne van Olst (Exquis Clearwater), Jim Rasmussen (Broholm’s Highlight) and Anne Troensegaard (Seduc). It is over a quarter of a century since Anne-Grethe Jensen and Marzog won the very first FEI World Cupâ ¢ Dressage title for Denmark, and in this season when the Final returns to the scene of that glorious victory back in 1986, the Danes will be determined to have the strongest representation possible at the deciding event.

FEI World Cupâ ¢ Dressage, the only worldwide series in this discipline, has entered its 26th season. The series, created in 1985, comprises four leagues: Western European, Central European, North American (including Canada) and Pacific (Australia, New Zealand, Asia). Each FEI World Cupâ ¢ Dressage qualifier consists of a Grand Prix test, which in turn is a qualification for the Freestyle to music competition, where league points are accumulated towards places in the Final. Judged on both technical and artistic merit, the FEI World Cupâ ¢ Dressage combines art, sport and partnership between horse and rider at the highest level and consistently proves a winning formula with audiences all over the world.