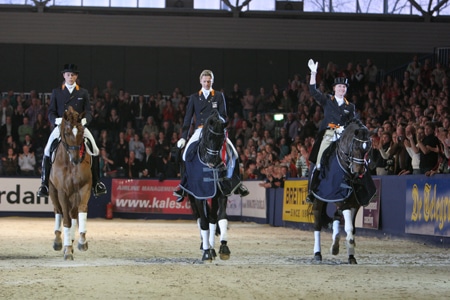 After Heike Kemmer now also Swiss Silvia IklÃ© with her passage and piaffe-miracle Salieri has promised Amsterdam will be her next stage to perform.In Frankfurt at the WCâ ¢ qualifier she became the runner up behind Isabell Werth.In this third qualifier of the Western European League Isabell Werth and Warum Nicht FRH repeated their win of the first qualifier of the season in Odense. However due to a reglement change Isabell Werth didnât receive World Cupâ ¢ standing points. She as the title defender is automatically qualified for the Final and should not take away standing points from those still trying to qualify. So runner up Swiss Silvia IklÃ© partnering Salieri now received the World Cupâ ¢ standing points for the winner.

Silvia IklÃ© rode her wonderful tango-Freestyle that already brought her a lot of fame. âBoth me and Salieri feel very confident and happy with the music, we love to perform this Freestyle testâ, Silvia IklÃ© smiled. Highlights of course were the piaffe and passage. Some minor mistakes in the one tempi changes and the limitations in the extended walk prevented her from a higher score. Silvia IklÃ© has not made up her mind yet for the World Cupâ ¢ Season but hopes to be in Amsterdam and see what the standings might bring her from that point, as obviously the year 2008 brings the Olympic challenge which marks the season.