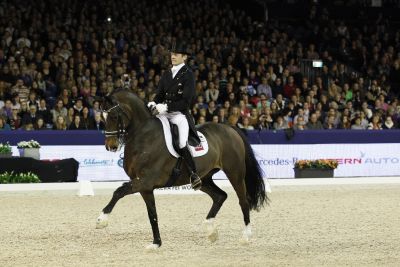 The Grand Prix classes in Drachten last weekend featured several strong performances. Among them was Edward Gal’s performance with his Olympic trump card Undercover, who continues to make visible progress. In the Grand Prix, the expressive black horse scored 77.085% for a significant advantage over the rest of the field. Gal also reigned supreme in the Special, riding Undercover to a score of 75.833%.

Gal seemed satisfied with his ride. “I think we showed some very good things. For instance, the piaffe and passage were very good, but there was some tension now and then. Undercover was clearly more relaxed in the Grand Prix. In the Special, we could’ve easily scored higher if I hadn’t been so stupid as to do the wrong test. I still had the Olympic Special in my head, but from January 1st on, we have to do the ‘old’ Special again,” according to Gal, who clearly considered the Drachten show as a warm-up for the Reem Acra FEI World Cupâ ¢ Qualifier in Amsterdam next week.