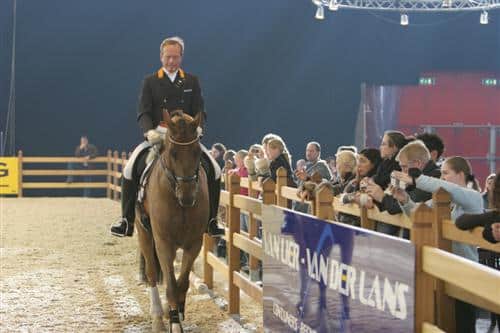 The FEI World Cupâ ¢ in Mechelen showed a Dutch podium with Anky van Grunsven, Imke Schellekens-Bartels and Laurens van Lieren at the first three places. Anky van Grunsven and her elegant black approved stallion IPS Painted Black were the unexpected winners of the fifth qualifier in the Western European League of the FEI World Cupâ ¢ in Mechelen. In nine days time two World Cupâ ¢ qualifier wins, do you ever get used to victories, was questioned to Anky van Grunsven in Mechelen. With a big smile she said: âI must be honest: my win here partnered with IPS Painted Black was not expected in the least! Yesterday in Grand Prix I didnât expect to win, today neither. I am very happy with the improvements IPS Painted Black has made and when that may lead to wins, it is even more remarkable.â

Imke Schellekens-Bartels became the runner up twice. Yesterday in Grand Prix she blamed herself totally for leaving her mare Hunter Douglas Sunrise on her own. It was the first outing of the pair after the successful European Championships in September with the two individual bronze medals and show routine had gone.  Laurens van Lieren was the happy third. He had not been very lucky the day before when Hexagonâs Ollright was disturbed by the noises and became seventh. Disturbances also left the horse from resting during the night. However today Ollright felt at ease in the arena and showed his possibilities without tension.

Belgium had four riders competing in this home qualifier. Jeroen Devroe ended at a nice fourth position after the Dutch power. The routine in riding more qualifiers was paid of today, he felt. âI used to sort of undergo the test instead of riding it. Now I feel I am starting to âownâ the test and ride it instead of undergoing it.â  Anky van Grunsven will bring as promised in London IPS Salinero to the next World Cupâ ¢ in Amsterdam. The next three in a row of Mechelen Imke Schellekens-Bartels, Laurens van Lieren and Jeroen Devroe also have Amsterdam in their schedule. As tension builds up toward the final in Amsterdam, all like to add some more ranking points to be certain from a deserved place in the final.