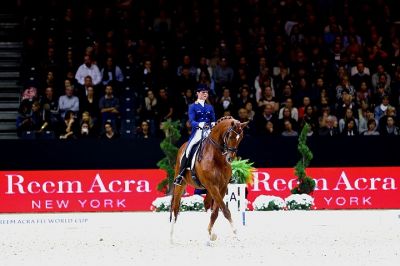 The great Dutch master, Jerich Parzival, claimed maximum points for The Netherlandsâ Adelinde Cornelissen at the second leg of the Reem Acra FEI World Cupâ ¢ Dressage 2014/2015 Western European League in Lyon, France tonight. Belying his 17 years, the big chestnut gelding who carried his rider to a double of series victories in 2011 and 2012 and who was runner-up at the opening leg of the series in Odense, Denmark two weeks ago, produced a lovely performance to post the highest score of 80.300 in the Grand Prix Freestyle. But the Dutch duo, who also claimed team and individual Freestyle bronze at the Alltech FEI World Equestrian Gamesâ ¢ 2014 in Normandy two months ago, were closely followed by Germanyâs Fabienne Lutkemeier and DâAgostino FRH in runner-up spot while another former FEI World Cupâ ¢ Dressage double-champion, Germanyâs Ulla Salzgeber, slotted into third with Herzrufâs Erbe.

Cornelissen reflected on how things turned out for her over the last few days. It wasnât completely plain-sailing with Jerich Parzival under the Lyon lights. âI know he is very experienced and really knows his job, but he was quite spooky yesterday in the Grand Prix and not full of confidence. I think the light in the arena was a bit different or something, but he turned into his old Jerich Parzival spooky self yesterday, so today I hoped he would be better and he was – a lot better and much more confident!â

To some extent however, his renewed confidence created its own problems today. âI could ride forward a lot more, he was going so well I wanted to let him go when he was happy to do it, but as a result I got a bit ahead of my music so that wasnât perfectâ Cornelissen explained.

She talked about how she keeps this great horse in such good shape at this late stage in his career. âI try to do as much of his work outdoors as I can, on the race-track and in the woods, doing piaffe and passage, thatâs how I train him now rather than in the arena, although of course sometimes you have to go in the arena, especially before a competition. Heâs top fit at the momentâ she pointed out.

He certainly looked in great form tonight, and well on the road to challenging for his third Reem Acra FEI World Cupâ ¢ Dressage title when the 2014/2015 Final arrives in Las Vegas, USA in six months time.

Only 3 legs to go before the dressage world top will compete at Jumping Amsterdam!