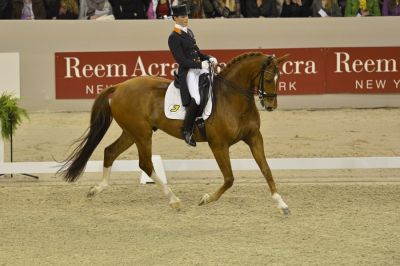 The FEI is delighted to announce that Reem Acra, the internationally renowned fashion designer, has signed a new contract extending her title sponsorship of the FEI World Cupâ ¢ Dressage Western European League and Final for a further three-year cycle until 2016.

The current contract with Ms Acra runs until the Reem Acra FEI World Cupâ ¢ Final 2013, which will be held in Gothenburg (SWE), and the new agreement will then run through to the end of the 2015/2016 series, including the Final.

âWhen I took on the title sponsorship of the Western European League and the World Cup Final in October 2010, I did it because I love the sport and I love horses,â said Reem Acra. âIt has proved to be a perfect match for the Reem Acra brand. The elegance of dressage reflects the passion and creativity that inspire my own designs.â