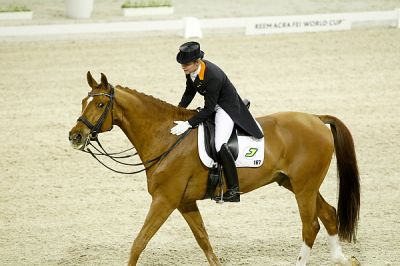 The first component of the Reem Acra Fei World Cup Dressage presented by Horse Service International was held on Friday morning in the Amsterdam RAI. Adelinde Cornelissen was the strongest competitor with Jerich Parzival. The amazone from The Netherlands scored a total of 77.170%.

Runner up was Swedish rider Patrik Kittel with Watermill Scandic HBC (72.364%). With a minimal difference of 0.234%, Isabelle Werth came in third with his gelding Warum Nicht FRH.

“This competition is a wonderfull beginning of a new dressage year, as the first qualifier in 2011. I wish you all the best!” mentioned president of the dressage judges Mr. J. Roudier from France. Winner Adelinde Cornelissen was clearly releaved after her accomplishment. âJerich parzival can become quite overexcited and spooked, which proved to be disastrous last time. Today, thankfully, everything was fine!â