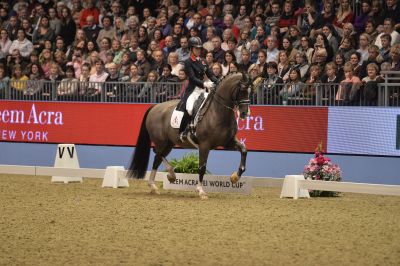 New York fashion designer, Reem Acra, was one of many to watch in awe as Great Britainâs Charlotte Du Jardin and Valegro smashed the Freestyle world record with a breath-taking winning performance at the London International Horse Show in Olympia tonight. The result provides the 28-year-old rider and her mighty steed with the full set of world records for the sport of Dressage.

Double-gold medallists on home turf at the London 2012 Olympic Games, the combination has not been seen in public since adding the European individual title to their stunning list of achievements at Herning in Denmark this summer. But their legions of fans were well-rewarded for the wait, as the dynamic duo marched resolutely to make it not just a British win in front of their home crowd at the much-loved Christmas fixture, but another watershed moment in the story of this most remarkable partnership.

Beirut-born Reem Acra chose the right night to make an appearance at one of the qualifiers she has been sponsoring for the last four years. In another pivotal moment for the sport, Du Jardin pinned the man who previously held the Freestyle record, Edward Gal, into runner-up spot. It was also at Olympia that the Dutchman and the fabulous black stallion, Totilas, set the target at 92.30 back in December 2009, and tonight Gal produced a really strong test with Glockâs Undercover for a mark of 87.425 to finish almost seven percentage points clear of impressive young Dutch cohort Danielle Heijkoop who slotted Kingsley Siro into third. Britainâs Michael Eilberg and Half Moon Delphi finished fourth, while The Netherlandsâ Hans Peter Minderhoud and Glockâs Romanov recovered from an uncharacteristically bad day in yesterdayâs Grand Prix to finish fifth ahead of Denmarkâs Nathalie zu Sayn-Wittgenstein and the veteran Digby in sixth.

It was a glittering evening from start to finish, and, as Du Jardin said tonight, the end result was âthe best Christmas present!â.