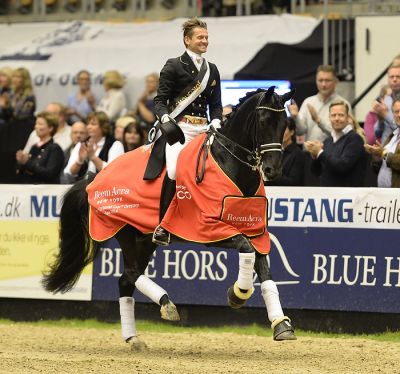 The Dutch were in dominant form at the Reem Acra FEI World Cupâ ¢ Dressage 2014/2015 Western European League opening leg at Odense in Denmark today, where Edward Gal pipped Adelinde Cornelissen for the main honours in the Grand Prix Freestyle.

Gal posted a warning of his intent when topping yesterdayâs Grand Prix with Glockâs Undercover. And he returned this afternoon to confirm that both he and his sensitive but talented 13-year-old horse are a force to be reckoned with going into the winter season.

Real battle
The real battle was played out between the final pair, Gal setting out his stall with a performance that saw him collecting multiple scores of 10. Piaffe, passage and half-pass were highlights, and despite their best efforts Cornelissen and Parzival just couldnât rein them in.

Yesterdayâs Grand Prix winning score of 84.100 was a personal best for Gal, and todayâs result was the icing on the cake, going some way towards easing the deep disappointment of being unable to take Undercover to the Alltech FEI World Equestrian Gamesâ ¢ in Normandy this summer due to a last-minute inflammation in the horseâs spine. Gal instead rode Glockâs Voice in the Dutch side that took team bronze.

âIt was a very big disappointment at the time, but the health of the horse counts for everything and you have to move on, and today he felt really goodâ said the 44-year-old rider. He was particularly pleased because the arena at Odense presents a difficult environment for the gelding. âThe spectators are sitting very high up along the side of the arena, and the arena is not so big so they feel very closeâ Gal explained.

The noise of the crowd, and the intense atmosphere, have been a real challenge to this horse throughout his career to date. But Gal feels Glockâs Undercover is coming to terms with it, and with himself, as time goes on.

He has had the horse for two-and-a-half years now, and it has taken him all that time to gain his confidence and teach him to relax when under the spotlight. It seems all the hard work is really paying off.

âYesterday he was really good, and today he was even more relaxed in the Freestyle. In the prize-giving today his heart was beating normally. Before, you could feel it beating so fast because he was so afraid! But today I got a really good feeling and I could ask him to do more and I could ride him through his extensionsâ Gal explained this evening.

Heâs now looking forward to the remainder of the Reem Acra FEI World Cupâ ¢ Dressage 2014/2015 season and is targeting appearances in London, Amsterdam and âs-Hertogenbosch over the coming months. âLondon is one of my favourites – I really like that showâ he said. And with the maximum 20 points on the leaderboard after todayâs great result, the 2010 champion has the Reem Acra FEI World Cupâ ¢ Dressage 2014/2015 Final in Las Vegas already in his sights.