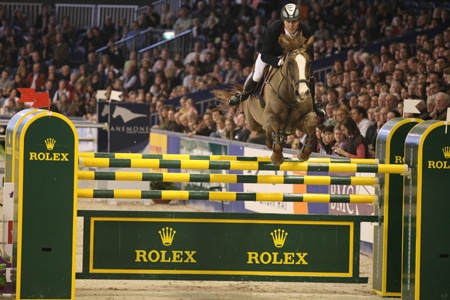 Mikael Forsten went into the record books today when clinching Finland’s first-ever Rolex FEI World Cupâ ¢ Jumping victory in the De Telegraaf-sponsored leg of the 2007/2008 series in Amsterdam, The Netherlands where there was no shortage of surprises.

With 15 through to the jump-off it was always going to take a brave effort to clinch maximum points here, but the 38 year old rider and his 12 year old chestnut gelding really put it up to the rest of them when third to go against the clock and not even some of the quickest horses and best riders in the sport could match their pace.

“Isaac gave me everything” Forsten said afterwards, “and I’m so very happy – this has been a special day for us – I’m really delighted!”.

However there was another show-stealer who created a bubble of excitement earlier in the competition.

As the first round was drawing to a close Dutch star Gerco Schroder was working his way around the arena with Eurocommerce Monaco when an animal rights protester, clad only in his underwear, streaked across the ring in an attempt to disrupt proceedings. Spectators watched with a mixture of amazement and amusement as the gentleman in question was chased at full speed by officials who eventually apprehended him and led him away, but while he had his moment in the limelight the impact of his interruption was short-lived as the unflappable Dutch partnership simply went back to work and comfortably joined the second-round line-up.

Pathfinder against the clock was Gerco’s brother Wim riding Eurocommerce New Jersey who returned with four faults in 39.14 seconds, and then Italy’s Omar Bonomelli followed with a slow clear from Quintero in 44.80 seconds to set the early pace. That was immediately dismissed by Forsten however who shaved almost seven full seconds off the target when storming home in 38.08 seconds.

“Because I was going early I didn’t see anyone else, but I could feel Isaac was flying – he is French-bred and has all the scope, but his rideability can be a bit questionable sometimes although he always tries to clear the fences. Today though he was unbelievably fast…..” the Finnish rider said afterwards.

Mikko, as Forsten is known to his friends, was not convinced that he had been quick enough to win and watched from the sidelines with his partner, fellow-Finnish rider Noora Pentti, who had two fences down in the first round.

Italy’s Jonella Ligresti was next to go with Nanta, but their chances were dashed when the mare crumpled on landing over a fence and decanted her rider, and when Belgium’s Angelique Hoorn collected four faults with Blauwendraad’s O’Brien in 40.99 seconds there was still no sign of a strong challenge to his lead. Max Kuhner, a real “find” for Germany during this indoor season, kept a cool head to leave the course intact but in the slow time of 44.91 seconds while Ireland’s Billy Twomey was more competitive when lowering just one fence with Tinka’s Serenade who broke the beam in 40.12.

Germany’s Heinrich-Herman Engemann had a good shot at Forsten’s target when crossing the line with Aboyeur in 38.39 seconds and Harrie Smolders and Exquis Oliver Q beat the time but left one on the floor in 38.02 so when Belgium’s Patrick McEntee and Ever Mury Marais Z were clear but slow the Finn was still out in front with five left to go.

The 2006 Rolex FEI World Cupâ ¢ Jumping champion Marcus Ehning from Germany opted for a degree of caution when bringing Sandro Boy home in 38.46 seconds and when Holland’s Piet Raijmakers Snr riding Van Schijndel’s Curtis put two on the floor and Frenchwoman Eugenie Angot was clear with Ilostra Dark in 39.05 seconds only two riders stood in the way of show jumping history. But what a pair they were. The Netherlands had six riders through to the closing stages and second-last to go was the irrepressible partnership of Albert Zoer and Oki Doki who have blazed a trail through the sport over the last year while last in was Gerco Schroder. A single error in 38.43 seconds saw Zoer having to settle for tenth place while Schroder just couldn’t match that leading time – the clock showing 38.25 seconds as he crossed the line to take runner-up spot ahead of Engemann.

“To be honest I expected Ehning, Albert and Gerco would be faster than me and I was just hoping that the rest would have to go wild to try to catch my time!” Forsten explained afterwards. “I’m absolutely delighted – this is my first World Cup win of course – I have won some Grand Prix’s but at 3-Star and 2-Star level but nothing like this and I believe I am the first Finnish rider to win a World Cup competition, the best we have ever placed before was third I think” he added.

Today’s success has broadened his horizons considerably and he is planning to take in the next qualifying leg in Bordeaux next weekend and then Vigo in Spain the following week – “I’m going to try to qualify for the final in Gothenburg – that is my aim now!” he said determinedly.

He has certainly boosted his chances of getting there as today’s result has raised him to eleventh place on the leaderboard and, with 34 points now to his credit, he needs just one more good placing to make the cut. But the final three qualifying legs will see some razor-sharp competition and he will have to stay on the very top of his game…..