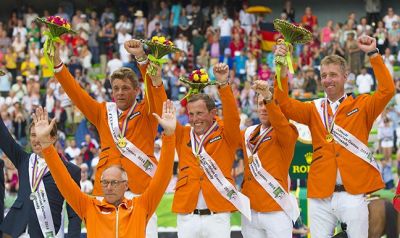 Yesterday the Netherlands won team showjumping gold at the World Equistrian Games in Normandy! Thanks to a clear round from Jur Vrieling with his incredible stallion VDL Bubalu the Netherlands secured the golden medal even before Gerco SchrÃ¶der completed his course. France was left with silver and the USA clinched the bronze medal.

Rob Ehrensâ golden equipe consisted of Jeroen Dubbeldam with Zenith SFN, Maikel van der Vleuten with VDL Groep Verdi TN N.O.P., Jur Vrieling with VDL Bubalu and Gerco SchrÃ¶der with Glockâs London N.O.P. With a fantastic clear round Jur Vrieling took revenge for the nine faults from his ride the day before. He was the only rider who jumped a clear round. Maikel van der Vleuten and Gerco SchrÃ¶der both took one fence down. Jumping-advisor Jeroen Dubbeldam also incurred a time fault.

Beezie Madden is first on the individual leaderboard with 0,16 faults. Gerco SchÃ¶der and London are in 9th place with 5,29 faults. Jeroen Dubbeldam is in 13th place and Michael van de Vleuten is in 16th place.