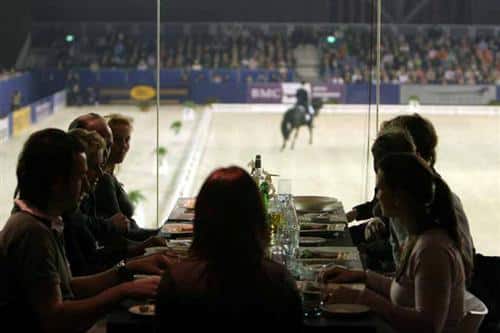 Jumping belongs to Amsterdam like Anky van Grunsven belongs to IPS Salinero. The international equestrian event will take place in Hollandâs capital city for the 49th time on the last weekend in January. Jumping Amsterdam looks back to a turbulent year with a change in the organisation and a new board. But beside the Amsterdam Community, Foundation Topsport Amsterdam, De Telegraaf and the Amsterdam RAI, the province of Noord-Holland has become part of the very strong basis. These parties ensure an irreplaceable platform and secure the continuation of the event. We are already looking forward to the 50th edition in 2009!

Two World Cups
The Royal Dutch Equestrian Federation has done everything it could to positively introduce the new organisation of Jumping Amsterdam to the FEI. George de Jong, manager topsport and international affairs of the Dutch Federation, is very pleased that Amsterdam continues to host two FEI World Cupâ ¢ competitions in 2008. He is pleased to see that the new organisation has firmly started the preparations for Jumping Amsterdam 2008. âIt is crucial for our riders on their way to the Olympic Games in Hong Kong that we can keep organizing World Cup competitions in the Netherlands,â explains De Jong. The FEI World Cupâ ¢ Dressage qualifier Presented by the Province Noord-Holland, the kÃ¼r to music, is scheduled for Saturday afternoon 26 January. The Rolex FEI World Cupâ ¢ Jumping qualifier presented by De Telegraaf takes place on Sunday afternoon 27 January.

Kick off Olympic Year
Jumping Amsterdam is for many riders the first competition in the Olympic Year and the event enjoys a good position in the World Cup season. âJumpingâ not only takes place after the holidays, which is seen by many riders as a period of rest. Jumping Amsterdam offers a unique opportunity to show continuation of shape and to pick up the competition rhythm towards the Olympic Games in Hong Kong and the FEI World Cupâ ¢ Finals earlier in the season. For the FEI World Cupâ ¢ Dressage, Amsterdam is one of the last qualifiers before the Final in âs-Hertogenbosch, the Netherlands. Various top riders have already submitted their entries in Amsterdam. Dutch dressage queen Anky van Grunsven will use the opportunity to ride her trump horse IPS Salinero, but also Jan Brink (Swe) with Briar and Heike Kemmer (Ger) with Bonaparte have promised to start in Amsterdam. The spectators can furthermore enjoy various highlights in the freestyle tests, as most competitors will use new music for the Olympic Games 2008.In jumping, Amsterdam is the ninth qualifier in the World Cup series. After Bordeaux (Fra), Vigo (Esp) and âs-Hertogenbosch (Ned), the exciting Final will take place in Gothenburg (Swe). Jumping Amsterdam is traditionally a show jumping event, referring to her name. The emphasis in the programme is still on international jumping classes with the Grand Prix of Amsterdam on Saturday evening as one of its main highlights.

Amsterdam
The city of Amsterdam offers the spectators and competitors more than equestrian sports. The Amsterdam RAI exhibition centre in which Jumping Amsterdam takes place, is centrally located in the city, at walking distance from various hotels and close to Schiphol Airport. The fact that the government strongly supports âJumpingâ is a result of the fact that both âJumpingâ and âAmsterdamâ offer enormous attractions to tourists. Amsterdam is the centre of cultural activities and top sport events and was the premier location of the Netherlands during the 1928 Olympic Games. Beside top sport, Amsterdam guarantees a unique history and belongs to one of the most beautiful cities in Europe with her canals and monumental houses. A canal tour or a trip to one of the many museums will make a city trip to Jumping Amsterdam complete.

Information and tickets
Jumping Amsterdam takes place from Thursday 24 to Sunday 27 January 2008 in the Amsterdam RAI. For ticket sale, please contact TopTicketLine at +31 20 2061084.
More information about the event, hotels and the programme: www.jumpingamsterdam.nl