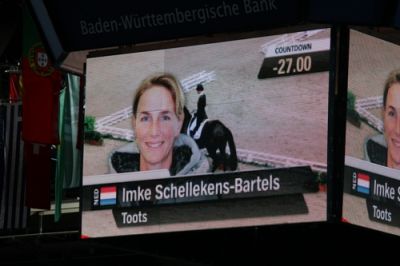 With a smooth Freestyle performance that oozed confidence and teamwork, the winning partnership finished more than four full marks ahead of German counterparts Kristina Sprehe and Desperados FRH in second place. And it was a big day for Italyâs Valentina Truppa. She registered runner-up spot at the previous leg in Lyon, France two weeks ago, but although she had to settle for third with Eremo del Castegno this time around, she has risen to the top of the Western European League table with a significant margin of advantage after todayâs result.

The placings of the top three mirrored those of yesterdayâs Grand Prix in which Langehanenbergâs score of 82.766 was a personal best. But fourth place today went to Swedenâs Tinne Vilhelmson-Silfven thanks to a much-improved effort with Don Auriello who inched The Netherlandsâ Imke Schellekens-Bartels and the gigantic black gelding, Toots, down to fifth.

Appealing
First to break the 70 per cent barrier today were Finlandâs Terhi Stegars and her appealing black stallion Axis TSF who put 72.925 on the board. But they were immediately replaced at the top of the order by the French partnership of Jessica Michel and Riwera de Hus who scored 73.475. This horse oozes power and potential, and the French rider is clearly growing in ring-craft and courage with every outing during her debut season at this level of the sport.

Two horses later, the first of the three-strong German contingent moved out in front as Uta Grafâs black stallion, Le Noir, posted a mark of 73.525, but then Vilhelmson-Silfven showed that yesterdayâs ninth placing in the Grand Prix was only a blip as she steered Don Auriello, who is still only ten years old, to a score of 77.300 which really raised the bar for the rest of them.

No Threat
Italyâs Truppa and her 11 year old gelding, Eremo del Castegno, posted 80.600 to pose no threat to the leading pair, but the last of the German contingent bettered that when Kristina Sprehe and Desperados FRH were awarded 82.275 at the end of a performance that included some lovely moments along with some slightly over-enthusiastic ones to overtake the Italian for runner-up spot.

And that was how it would stay, despite a thoroughly entertaining test from the penultimate Danish duo of Sidsel Johansen and Schianto whose crowd-pleasing qualities were such that their mark of 77.100 was greeted by noisy disagreement from the spectators. This 13 year old gelding showed lots of suspension and floated through extended trot. But it was his final ride up the centre line that completely captivated the audience – he looked like he was skipping with enjoyment, and when he drew to a halt the smile on Johansenâs face was equally as delightful. Their mark left them temporarily in fifth place, but when the final partnership of Imke Schellekens-Bartels and the massive 12 year old gelding, Toots, who is, according to his rider, over 1.80cms tall, squeezed in ahead of them, the Danish pair had to settle for sixth in the final analysis.

High Standard
Talking about the performances the Ground Jury saw today, judge at C, Dr Dieter Schule, said âthe standard was really high and the top riders produced really good tests. We looked at the quality of the performances, the difficulty of each Freestyle and how well the horses and riders worked with their music along with the technical aspects – and Helen and Damon Hill were exceptional todayâ he explained.

Super-Intelligent
Describing the stallionâs character, she said the thing she likes most about Damon Hill is âthat he always fights for meâ and that he is, apparently, super-intelligent. âIâm pretty sure he can read and he can write, he knows exactly whatâs going on all the time, and of course he just loves attention, so he gets lots of it! In fact heâs sometimes more like a big dog than a horse, he is so affectionate and friendly. If he could sit on the sofa beside you and cuddle up, then he would!â she insisted.

Back at his stable tonight however he can look forward to another break before returning to the Reem Acra FEI World Cupâ ¢ Dressage 2012/2013 series action in Amsterdam, The Netherlands in January, and Neumunster, Germany in February. âAfter that I will see how it is looking for qualification for the Reem Acra final in Gothenburg next Aprilâ said the rider who has now moved into equal-sixth place on the leaderboard ahead of the next leg of the series which takes place in Stockholm, Sweden on 2 December.