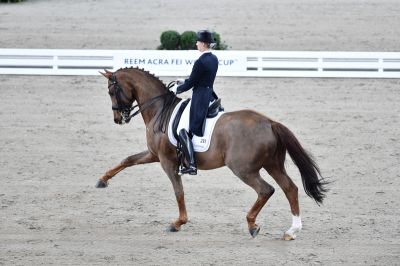 Fabienne Lutkemeier and DâAgostino headed a German whitewash as home riders claimed the top four, and five of the top six places, at the third leg of the Reem Acra FEI World Cupâ ¢ Dressage 2014/2015 Western European League at Stuttgart today.

In a competition filled with quality performances, Jessica von Bredow-Werndl finished a close second with Unee BB ahead of Isabell Werth and Don Johnson NRW in third, while Dorothee Schneider completed the top-four clean sweep for the host nation when next in line with Forward Thinking.

Only Hollandâs Danielle Heijkoop and Kingsley Siro NOP managed to break the German grip at the sharp end of the leaderboard when slotting into fifth ahead of Sonke Rothenberger and Favourit.

Lutkemeier was delighted with the result which has promoted her to the top of the Reem Acra FEI World Cupâ ¢ Dressage Western European League table. âIt was a great competition and there was a big atmosphere in the arena today, but DâAgostino felt really good and controlled and focusedâ said the 25-year-old who hails from Paderborn in Germany.

Only 2 legs to go until the dressage world top will compete at Jumping Amsterdam!