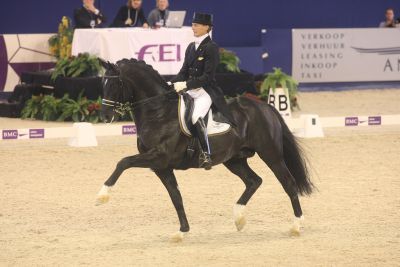 In 2008 he already draw everyoneâs attention by winning the Small Tour in Amsterdam, in 2009 he became the âmiracle on four legsâ: Moorlands Totilas. The black stallion sets world record after world record, ridden by Edward Gal. Judges and spectators cannot stop talking about him. On Friday 22 and Saturday 23 January he is one of the highlights of the FEI World Cup Dressage presented by BMC at Jumping Amsterdam.

The Grand Prix is scheduled on Friday and the Top 15 combinations qualify for the freestyle kÃ¼r to music. The kÃ¼r takes place on Saturday 23 January in front of an expected sold out Amsterdam RAI convention center. The competitorâs field is extremely strong; beside Edward Gal the spectators can also enjoy the performances of dressage queens Anky van Grunsven and Germanyâs Isabell Werth.