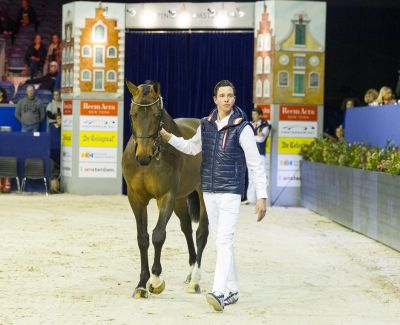 Amsterdam â the first edition of the Jumping Talent Sale, held on the eve of Jumping Amsterdam on Wednesday the 28th of January, was a great success with an average yield of â¬116.142,85 and a total amount of â¬2.4 million euro was spent on the 21 young show jumping horses. Auction star Flyer B (Unaniem) was sold for â¬330.000 to the Greek Athina Onassis de Miranda and her Brazilian spouse Doda Alvaro Affonso de Miranda Neto. Daddy Cool (Douglas) was sold for â¬300.000 to the Russian rider Maria Madenova. Dakota (Carolus II) will be going to Turkey for â¬210.000.

In total, ten of the twenty one horses selected by Jeroen Dubbeldam, Wim SchrÃ¶der, Ben SchrÃ¶der and Mario Everse were sold for over â¬100.000. ââOf course we knew we had a fantastic selection and in the last few weeks interest was shown from all over the worldââ said initiator Jeroen Dubbeldam. ââWe are incredibly happy, and the horses will go to great stables as well.ââ

The opening piece, a âJumping Amsterdammetjeâ, designed by Atelier Loeviera, was sold for â¬4.600. The proceeds will go to the Emma Kinderziekenhuis AMC, a childrenâs hospital. The five year old mare Farrah W (v. Cantos) was the first to be auctioned and went to Switzerland for â¬100.000. The Zangersheide approved Ermindo-W (Singapore) was sold for â¬170.000. Babe W X (Big Star) and Indiana van HD (Toulon) both changed owners for â¬150.000. Foudre F went to the Irish rider Shane Breen.