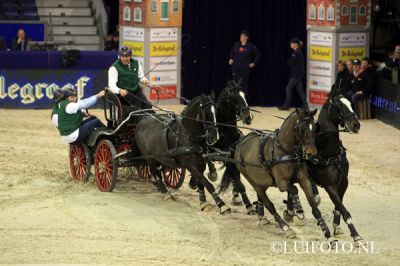 IJsbrand Chardon (NED) has won the fourth leg of the FEI World Cupâ ¢ Driving 2013/2014 in Budapest, Hungary. Chardon drove his experienced team of Lipizzaner horses to victory ahead of his compatriot and European Champion Theo Timmerman and local favourite JÃ³zsef Dobrovitz (HUN).

Hungarian O-course designer GÃ¡bor Fintha had laid out a very nice course in the LÃ¡szlo Papp Sports Arena with fast and technical parts, which was much appreciated by the drivers.

Back to basics
After a less than satisfactory first competition in Budapest on Saturday evening, Chardon decided to go back to basics and switched his new leader horse, with which he finished third in Hannover, for the experienced Inci. This resulted in two amazing clear rounds, which contributed to a fantastic atmosphere in the arena, and Chardon and his team of Hungarian Lipizzaner horses had great support from the enthusiastic spectators, many of which had seen him win the FEI World Cupâ ¢ Driving in 2012. And this time he finished more than 23 penalty seconds ahead of Timmerman and Dobrovitz.

According to plan
Theo Timmerman had set himself the goal of using the first competition in Hannover and his wild card start in Verona to get into the right rhythm for his next four events. After his fifth place in Hannover and his second place in Verona, his aim was to do well in Budapest.

He started off very fast in the first round and an unfortunate ball off the last cone luckily did not stop him qualifying for the Winning Round, in which he was second to go. The reigning European and Dutch Champion has been driving his indoor team for several years now and the experience was paying off. After a flying start, Timmerman slowed down a bit after he had a knock down in the second marathon obstacle and he finished just over one second faster than Dobrovitz, securing his second place.

New leader horse
JÃ³zsef Dobrovitz, who is from the town of VecsÃ©s, around 20 kilometers away from Budapest, had strong local support. He qualified for the Winning Round despite knocking two balls in the first round, thanks to the magnificent high speed of his team. The successful Hungarian driver used a new Lipizzaner horse in the lead of his team, but the speed resulted in another two knockdowns, and he had to settle for third place.

Safe round
Stuttgart-winner Daniel Schneiders decided to go for a safe round. He took his mixed team of German, Dutch and English horses through the course at a good speed, but unfortunately had one ball down, to finish in fourth place.

Family affair
Fifth place went to JÃ³zsef Dobrovitz junior who, like his father, also drove a new horse in the lead of his team. JÃ³zsefâs nephews, Mark and Kristof OsztertÃ¡g, both received a wild card in Budapest, resulting in a true family affair, with four Dobrovitz family members on the start list.Kristof, who finished sixth in Budapest, competed as an individual at the FEI European four-in-hand Championships in IzsÃ¡k and competed in the horse pairs and pony pairs classes this season. The 21-year-old was also a member of the bronze-medal-winning Hungarian team at the FEI World Pony Championships in Pau (FRA), where he finished 15th individually.His 23-year old brother Mark came seventh. He drove both a pair and a four-in-hand this season, competed as an individual at the FEI World Pair Championships in Topolcianky (SVK) and at the FEI European four-in-hand Championships in IzsÃ¡k (HUN).

Results in detail can be viewed  here