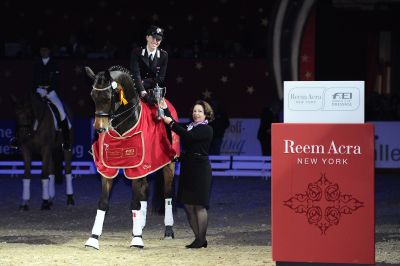 Valentina Truppa won the fifth leg of the Reem Acra FEI World Cupâ ¢ Dressage 2011/2012 series in Frankfurt, Germany with a great performance from Eremo Del Castegno. The 25 year old rider from Monferrato in Northern Italy, a prolific winner already in her career, pinned Germany’s Monica Theodorescu and Dorothee Schneider into second and third places respectively, while Sweden’s Patrik Kittel finished fourth ahead of The Netherlands’ Hans Peter Minderhoud in fifth.

It was a disappointing day for German super-star Isabell Werth who threw down the gauntlet with victory in the preliminary Grand Prix, but who had to settle for sixth place this time around in the Grand Prix Freestyle to Music. While her flamboyant nine-year-old, Don Johnson, showed flashes of brilliance, the accumulation of mistakes during their lively test proved too expensive.

Dutchman, Minderhoud, was heading the scoreboard at the judging break that followed the first nine of the 14 starters this morning. The 2011 European individual bronze medallist won the opening leg of the winter-long series at Odense in Denmark in October riding the 11 year old chestnut stallion, IPS Tango, and this time set the target with the same horse when posting a mark of 75.825.

For Truppa, it was yet another in a series of successes at one of her all-time favourite venues. “I’m very happy with my riding and with my horse who felt really good today” she said afterwards. “Frankfurt is a very special place for me because I won the FEI World Cupâ ¢ Dressage Final for Young Riders here on three occasions” she added.

Her result has boosted Truppa to runner-up spot on the Reem Acra FEI World Cupâ ¢ Western European League 2011/2012 leaderboard which is now headed by Kittel, but it is very tight at the top. Just three marks separate the three leading riders going into the next leg of the series at Mechelen in Belgium after Christmas.