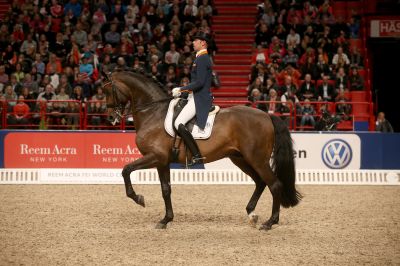 It was smiles all round in Stockholm, Sweden today where Tinne Vilhelmson-Silfven clinched victory in the Reem Acra FEI World Cupâ ¢ Dressage qualifier on home turf for the second year in a row. Riding the brilliant Don Auriello, the 46-year-old rider headed The Netherlandsâ Edward Gal and the exciting Glockâs Voice, while the Dutch duo of Hans-Peter Minderhoud and Glockâs Romanov slotted into third.

It was an important day for Vilhelmson-Silfven, underpinning the strength of her relationship with the 11-year-old gelding who continues his impressive upward curve of confidence and capability. It wasnât all plain sailing, with a few stumbles interrupting an otherwise excellent performance, but such is the quality of this horseâs work, and of his belief in his rider, that they quickly recovered to come out on top.

Sweden fielded five of the 15 contenders in todayâs class, but it was Denmarkâs Nanna Skodborg Merrald and Millibar who finished fourth ahead of Germanyâs Jessica von Bredow-Werndl and Unee B in fifth.

These two young riders are making a big impression this season, the former also finishing fourth on home ground at the opening leg of the 2013/2014 Western European League qualifying series at Odense in October, while von Bredow-Werndl has been making her presence felt in every leg so far.