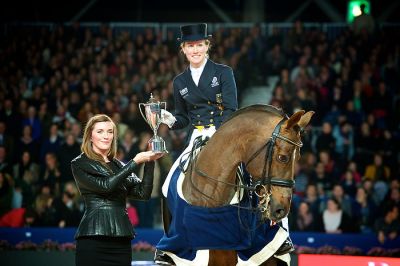 Langehanenbergâs form in recent months had suggested that it would not be long before she and her lovely stallion would find the key to finishing ahead of the Dutch duo who have dominated the prestigious indoor series over the last few years.   At last yearâs Final in âs-Hertogenbosch (NED) where Cornelissen came out on top for the second successive season, Ground Jury President, Great Britainâs Stephen Clarke, told the German rider that she had only a little more polish to find in order to improve from runner-up position, and Langehenanberg has worked hard to bridge that gap ever since.

At the World Dressage Masters in Mechelen, Belgium last month she beat Cornelissen in the Grand Prix only to fall victim to a problem with her music, which stopped during her Freestyle, but it was clear she was now a real threat. Today she showed that result was no fluke as she produced a sparkling test on an afternoon when many others failed to show their very best in the electric atmosphere of the Amsterdam Rai arena. It was a watershed win for Langehanenberg, marking another turning point in her steady march to the very top of her sport.

Swedenâs Minna Telde and Santana went into the lead with a new personal-best Freestyle score of 77.700 with just six horses left to go, but Cornelissen swept that aside when next into the arena with Parzival who racked up 85.425, receiving a colossal 94 per cent artistic score from the Judge at C, The Netherlandsâ Ghislain Fouarge.   The big chestnut gelding produced lovely, rolling one-time changes on his third start in the current Reem Acra FEI World Cupâ ¢ Dressage season but was tight and tense at times, his trademark pirouettes not always coming off as smoothly as usual, and it was clear Cornelissen was working to keep his attention.

Despite a couple of naughty moments from Eremo del Castegno, long-time league leader Valentina Truppa from Italy then posted 80.775 to slot into second, but Isabell Werth and Don Johnson FRH immediately relegated them with a lovely performance that demonstrated the growing strength of this partnership.   Werth looks like she is really enjoying her riding these days, and harnessed her horseâs natural power to great effect with deliberate passage, athletic half-pass and a great walk for a mark of 82.050.

Second-last into the ring, things didnât go quite so smoothly for Dutchman Edward Gal and his relatively new ride, the stallion Glockâs Romanov who never really settled as they put 79.200 on the scoreboard for eventual fifth place.

But Langehaneberg and Damon Hill NRW were super-cool when bringing the class to a close, the 13 year old stallion really rising to the challenge and helping his rider snatch the opportunity they have both been waiting for.   âBefore I went in, I knew it wasnât impossible for me to beat Adelinde, but I also knew that I could not afford to lose one point.   I had to focus on my ride, to be strong and to think forwardâ.

Following her instincts to the letter she did just that, never pushing for too much yet producing work of the highest calibre, always balanced and correct and a joy to watch. Spectators held their breath as the judges marks were gathered, and even the home crowd couldnât resist a gasp of delight as the German lady clinched it with a score of 86.025.