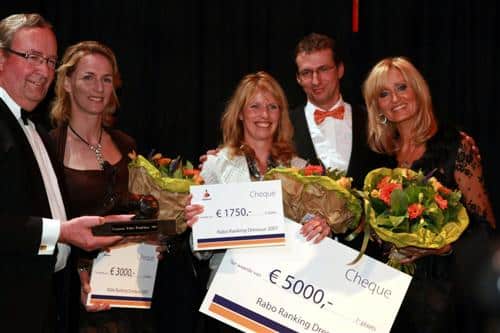 At the Join Jumping Gala Wednesday evening Prices were awarded to the winners of the Rabo Ranking 2007. Not difficult to guess where the highest money went to: to Albert Zoer and Anky van Grunsven. Albert Zoer and Okidoki and Anky van Grunsven and IPS Salinero were the two highest placed horse and rider combinations at the Rankings Showjumping and Dressage repectively, being two respected team members of their gold winning teams at the European.

Albert Zoer could not be in Amsterdam as at the same time he was awarded âSportman of the province Drentheâ, in the northern region of his place of origin. Anky van Grunsven both became first und third in the Rabo Ranking, Imke Schellekens-Bartels and Hunter Douglas Sunrise ware the runner up. Ofcourse Anky and IPS Salinero was the winning pair. Anky van Grunsven and KWPN-approved stallion IPS Painted Black became third. This pair at the end of the year improved their ranking position by winning the last international Grand Prix and Grand Prix Freestyle of the year, the World Cupâ ¢ Qualifier in Mechelen, Belgium.   Different from the FEI BCM Rankings is that for the Rabo Ranking the result of the combination rider-horse is listed. The owners of the winning horses are rewarded with a honorary statue.