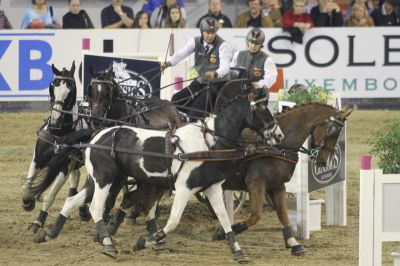 By Cindy TimmerKoos de Ronde (NED), the reigning FEI World Cupâ ¢ Driving champion, won the first leg of the new season at Hannover (GER). The Flying Dutchman got off to a brilliant start and stayed ahead of his strongest challengers, Boyd Exell (AUS) and IJsbrand Chardon (NED).

The season opener in the Hannover Messe came down to an exciting battle between the three top drivers, and even at this early stage, they pushed each other to the maximum giving promise of an exciting season ahead.

Boyd Exell set the fastest time in the Winning Round, but unexpectedly had a knock down. Second starter IJsbrand Chardon used a new leader in his team to increase his speed and drove a clear round, but was slightly slower than Exell.

Last man in, Koos de Ronde knew he couldnât afford to make any mistakes and kept his head clear. The tension grew amongst the many enthusiastic spectators in Hannover as De Ronde drove at top speed through the much-praised course, designed by German O-course designer Dr Wolfgang Asendorf. The crowd cheered as never before when De Ronde, who also drove a new leader horse in his four-in-hand, was crowned the winner after a clear round.

De Ronde, Chardon and Timmerman will be participating at the spectaculair driving evening ‘Mennen in Mokum’ during Jumping Amsterdam on the 26th of January 2014!