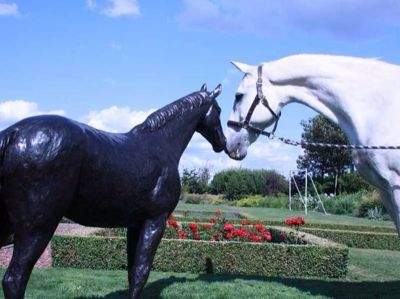 WEERSELO â A bronze statue of the legendary horse De Sjiem has been placed at Jeroen Dubbeldamâs stables at Weerselo.

De Sjiem definitely deserves a statue: he became Olympic Champion in Sydney in 2000, won the Grand Prix of Aken in 2001 and finished second in the Grand Prix of Amsterdam. As soon as the statue was placed, De Sjiem came by to take a look at his bronze portrait. He snuffled curiously at the statueâs head. The statue is 2/3 of the actual hight of De Sjiem and was created as an assignment by sculptor Yvonne Piller from Santpoort.